S is for Sarah Angeline Chauncey 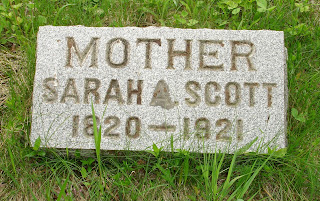 Sarah Angeline  Chauncey Scott was the daughter of Russell Chauncey and his wife Mable Porter.  Born in Ghent, Columbia Co., NY on April 24, 1820  she lived on Armenia Mt., Bradford Co., Pennsylvania  her entire married life time.  She was my great, great grandmother: the pride of the family tree,  for it is her ancestry that  goes back to the Mayflower.  I grew up knowing that I descended from John Howland, Mayflower pilgrim,  her  5x great grandfather.   WOW!    I have heard it said that we are a reflection of those who came before us.   Sarah Angeline Chauncey saw to it that  her descendents  knew their family history. The amazing thing about Grandmother Scott is that  she knew all the family history of her life time and  that of those who came before her, right back to John Howland the pilgrim.   She passed her knowledge on to her  daughter Helen and grand children. And they in turn passed the family history on to the rest of us.

Sarah Angeline  Chauncey was thirty years old when she  married Hosea Phillip Scott on March 2, 1850 in East Troy, Bradford Co., Pennsylvania.  They were married for 49 years when he died in  1899.  Hosea, born August 7, 1820 did service  in the Civil War.  They were the parents of two daughters: Mable,  born in August of 1855 and  Helen Florence,  born Nov. 5, 1860,  both of whom lived to mature years.  There was also a daughter named Laura who appears on the 1860 census report. Laura was born about 1858  and must have died before the 1870 census report as she does not show up on any other reports except the 1860 one. 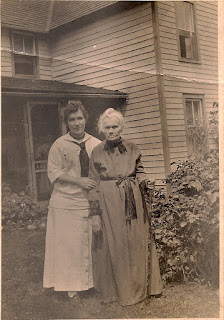 Perhaps this picture was taken on the occasion of her 98th birthday.  On the back  it says "Grandma Scott and Esther, taken at East Troy before the house burned."  The following newspaper article mentions that Esther was at the party.  The house in East Troy burned down on June 10, 1920.

"Mr. and Mrs. Clem Loomis, Mr. and Mrs. Frank Youmans and families, and Miss Esther Estep of Elmira, were week-end guests of their parents, Mr. and Mrs. Charles Estep and attended a birthday party for their grandmother, Mrs. Ann Scott, who was 98 years old.  Mrs. Scott is a very remarkable woman for her years as she has retained her faculties and still reads and knits a great deal." 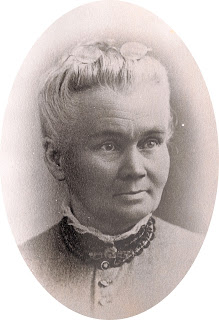 This picture was taken when  Sarah Scott was about 60 years old.  The picture was given to me by Aunt Angie,  Grandmother Scott's granddaughter and name sake.  Sarah Angeline Chauncey Scott was  known through out her life time  by several names.  Sometimes I see Sarah, other places Ann,  but family always seemed to refer to her as Sarah Angeline.   In the letter below, written to her grandson Francis Estep in 1920,  she signs her name Sarah. 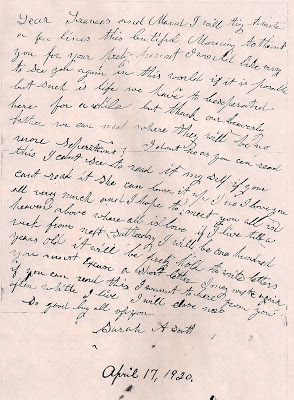 In the letter she professes her love for her family and the Lord, expressing that she will meet us in Heaven one day.  She was 100 when she wrote this letter and nearly blind.   Sarah Angeline  Chauncey died at the home of her daughter Helen Estep in South Port,  New York on  May 21, 1921.  Her death certificate states that the cause of death was due to apoplexy and arteriosclerosis.  She lived a long and useful life, well loved and remembered by her family.   I look forward to meeting her in Heaven one day.