What would Thanksgiving be if we didn't take time to remember the Pilgrims who hopped aboard that little sailing ship in 1620 to venture across the sea and take up residence at Plymouth Rock?  On this Thanksgiving Day,  I want to recognize 5 of those who were on the Mayflower and from whom I have direct lines of descent.

My grandmother Zilpha Estep Hughes was extremely proud to be descended from John Howland.  He was a single young man about the age of 21, traveling as the servant to Governor John Carver.  During the Mayflower's voyage, John fell overboard during a storm, and was almost lost at sea, but lucky for him, he was able to grab hold of the topsail halyards and others yanked him back aboard with a boat-hook. Glad you were a strong swimmer and got back on that ship John, because after all these years I can say, I owe my life to you!

But I won't stop there with debts of gratitude to those adventurous Pilgrims.  There was a wee girl by the name of Elizabeth Tilly on board also.  She was about 13 or so years old and traveled with her parents John and Joan Tilley.  Unfortunately John and Joan were among those  who died the first winter at Plymouth.  That left 13-year old daughter Elizabeth an orphan! Imagine that!  Striking out to an unknown place and then your parents die all too soon!

John Howland and Elizabeth Tilly married and raised a family of 10 children, Desire, John, Hope, Elizabeth, Lydia, Hannah, Joseph, Jabez, Ruth, and Isaac.  Their daughter Hope married John Chipman about 1647 and had twelve children.  Then we get a whole lot of begats and begottens  until it comes down the line to Sarah Angeline  Chauncey Scott, my great great grandmother.  Awesome!

Elizabeth Tilly Howland lived to the age of 80, a  long life in the New World.  John lived to be about the age of 72.  They must have been folks of strong constitution to survive the voyage to the New World, that harsh first winter and the hardships of  building a life in a foreign land. 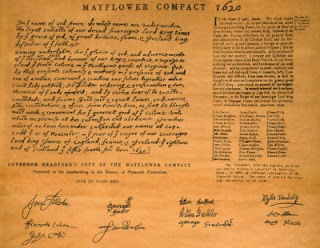 Now there is one more  Mayflower passenger I owe a bit of homage to.  That would be George Soule. Like John Howland, George also traveled on the Mayflower as a servant. He, to Edward Winslow and family.  George distinguished himself in the town of Duxbury,  building the community and serving on various committees; of note the committee formed to address the problem of  smoking tobacco. A line of descent from him transpired through the Ayers family who  finally reached Lower Mount Bethel twp. in Northampton Co., Pa. where Jane Ayers married Henry Rasley. They were the great grand parents of my mother, Lois McEwen Hughes. George Soule also enjoyed a long life living in the New World.  He died at the age of 80.


This page  © 2015, Cynthia H. Smith
Send email to chsmith47@yahoo.com
This site may be linked, but not duplicated in any way without consent. The copyright on this page must appear on all copied and/or printed material.