P is for Pritchard, Elizabeth Pritchard.

Elizabeth, who was born on August 16, 1824, grew up in Wales, the daughter of William Pritchard and his wife Elisabeth Charles.  Her family lived in Breconshire, Wales, pictured below.   At the age of  21 she married JamesEstep  on the 2nd of November, 1845.  Their marriage certificate described her as a spinster.  Now that is a strange  title  to be given to a young woman, but maybe back then in Wales it didn't carry such a derogatory meaning as it does today.

She was working in the village of Llanover as a servant at the time and James was employed as a farm servant living in Pistill Parish of Llanfihangel Talyllyn.  Neither of them could write as they signed their names to the document with an X.

Elizabeth’s children,  Sarah, Lewis, John, William and James were all born in Wales before the family made plans to emigrate to the United States.  She  was by then 36 years old.  They are the most recent immigrants in the family.  Many came before them, but I do not have an immigrant ancestor who arrived after 1858.   She must have been a woman of great strength and character to have left her  home in Wales with several small children and travel under difficult circumstances to a new land.

They traveled from Wales on the ship, The Sparkling Wave. Please take a minute to read that fascinating story.

They arrived in New York on October 29, 1857 and settled first near  Bloomsburg, Pa.   where James found work in the coal mines.  Insight into what their lives may have been like is found in a newspaper account of her son John’s life.  At the age of seven, John began working in the ore mines around Bloomsburg and continued to work in the Fallbrook Coal mine when the family later  moved to Fallbrook on Armenia Mountain in Tioga county.  It is very likely that all the sons  also began working in the mines at a young age.

Several more children were born  in the United States while they were living in Columbia County, Pennsylvania. David was born March 2, 1859, Rebecca in 1861, George in 1863, Charles, my great grandfather who married Helen Scott was born in 1865 and Elizabeth in 1866.    In 1869 the family relocated to Covert, on Armenia Mountain in  Tioga County, Pennsylvania. 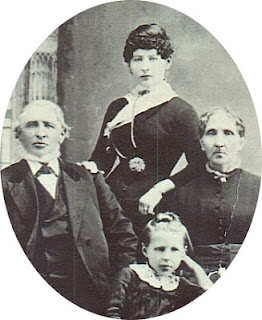 Picture of James and Elizabeth Pritchard Estep. Their daughter Elizabeth is standing  behind them.  The little girl in front is their adopted daughter Martha. You can read more about the  Estep Family on my web page.


James and Elizabeth Estep are buried in Arbon Cemetery in Blossburg,PA. In October of 1993, Lucille Henderson, great grand daughter of James and Elizabeth,  told me that the graves were moved from the cemetery at Covert to the Arbon Cemetery so that perpetual care could be provided. The tombstone gives these dates.
James Estep
May 12, 1818 - Aug. 3, 1901
Elizabeth, his wife
Aug. 10, 1826 - ( no death date engraved ) May 27, 1912 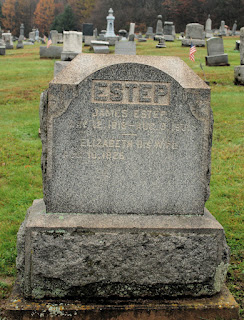 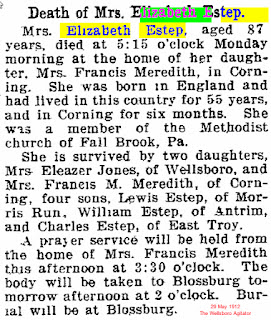 Elizabeth Pritchard Estep, mother of ten children, died on May 27, 1912 at the age of 87.  Five of her children preceded her in death.  She was survived by five of her children, fifty- two grandchildren, thirty-eight great grandchildren and one great grand child.  And in all these years no one has engraved her death date on  the grave stone. She was my great great grandmother. I am aware that there are conflicting dates  regarding her birth date.  Different documents give varying dates, but we do know that her  death date was May 27, 1912.

I often think of the arduous journey Elizabeth and her family made to reach the United States.  She must have been a women of great strength and character. It is a shame that her death date has not been engraved on her tombstone. Several older relatives promised to get that taken care of, but I have not been back up to the Blossburg  in several years to see if that is so.  If any one has a recent picture of the tombstone showing her death date please send me a copy.
Copyright
This page  © 2015, Cynthia H. Smith