Traveling back to 1707  to witness the birth of Thankful Hitchcock.    Here is  a photocopy of the exact  entry in the "Massachusetts, Springfield Vital Records, 1638-1887"  for her birth registration.

Her family lived in the  Springfield area of Massachusetts where Indian hostilities were an everyday possibility.  In 1704 the attack on nearby Deerfield, Massachusetts, by French and Native Americans during Queen Anne's War (1701-1713), resulted in more than half of Deerfield's residents being killed or captured.  Thankful, (I love her name!),  the daughter of John Hitchcock and his wife Mary Ball, was born October 1, 1707.   I would believe that they were very thankful that the Mohawk Indian attacks on settlements in western Massachusetts had spared their family.  You can learn more about the raid on Deerfield  and this time period here.  It was pretty rugged living in the wilderness of Western Massachusetts in the beginning of the 18th century.

Thankful grew up in a family of ten siblings.   When she was 24 years old she married Jonathan Scott.  On April 30, 1731 he  registered his Intentions to marry Thankful  as was required.

They were married  on June 9th, 1731.  Record of their marriage was recorded in the volume "Massachusetts, Springfield Vital Records, 1638-1887".

Thankful and Jonathan had at least eight children who were:
Thankful, Mary Mercy,  Isreal, Martha,  Jonathan,  Matthew,  Daniel and Eunice.   Sometime around 1760 the family moved to Bennington, Vermont where they lived the remainder of their lives.


In a time period when the life expectancy was less than  50 some years,  Thankful lived to be 94 years old!  Isn't that amazing?    Her  obituary  appeared in "The Vermont Gazette" in 1801.
It states -  "Died in this town (Bennington, VT) on Friday pm, Mrs. Thankful Scott, relict., of the late Mr. Jonathan Scott age 94 y, 3d."   That calculates her death date as October 4, 1801, three days after her birthday.  I have not found a picture of her gravestone.  Her husband Jonathan is buried in the Old Bennington Cemetery  where I suspect she was also buried. 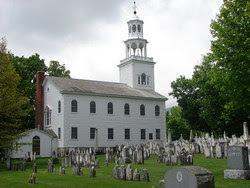