Q is for Query... What ever became of the husband of Catherine Davis?

Do you remember what happened in 1849?   It was the gold rush in California and men from all over the country fled to California to seek their fortune.   One of those fellows was Catherine's husband, Davie Hayton.  The stinker never came home!  Speculation is that he wrote her a letter saying he was not coming back.  No one ever heard from him again.   Well, OK... she was a little scary looking, but that is no reason to leave a woman! 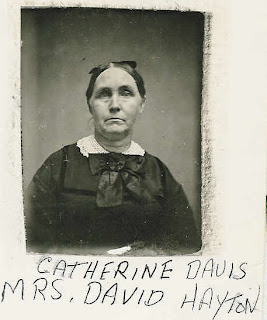 Catherine waited 10 years for Davie to come home from California  before she married a second time to Houghton Knapp, on Oct. 20, 1859 in Southport, New York.   Catherine and Houghton never had any children together, but a descendant of Catherine's,  Jeanette Brown,   remembers  the older people in her family talking about Grandmother Knapp, as she was known then.   After Catherine and Houghton were married they moved down to Daggetts, Jackson Township, Tioga County,  Pennsylvania,  which is south of the Elmira, Southport, New York area.

Catherine  died in Daggetts.    My father remembers that when he was a child he lived one winter in a house in Daggetts.    His Grandfather, Sim Hughes,  provided the house, a cow and hay for the cow  so that he and his sister would have milk that winter.  They may have lived in the house which had been Catherine Davis Hayton Knapp's.   Catherine was the grandmother of  Dad's grandmother, Fannie Westlake Hughes,  wife of Sim. 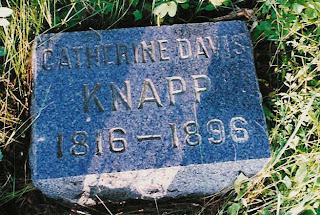 “Meet me loved ones
Up in Heaven,
There is room for one and all;
There’ll be no death
Nor parting,
This is mother’s last farewell.”

Her obituary contained  the above poem.  She lived to be 79 years old, often working to take care of others, making her home with her children or grandchildren after Houghton's death in 1876.  She  died May  18,  1896, at the home of her daughter, Mrs. Lewis Parmerter, (Mary Catherine) of Daggett, Pa.  The obituary notes that she was a consistent member of the Baptist Church  for many years.  The funeral was held  May 20th at Daggett,  Rev. Dunham officiating,  Interment at Judson Hill.