63 years old seems a young age to die and why did he suffer from "mental derangement"?  His much younger wife, Rachel, preceded him in death in 1869 at the age of 45.  Her death left several young children; Emma, Josiah, Enos, Sarah M., and George  motherless. John's first wife, Barbara Gruver, had died March 12, 1846 soon after the birth of her son John. Eight children from the first marriage: Margret Ann, Elizabeth, Ruben James, James Jefferson, William, Henry, Caroline and the infant John had also been left without a mother. No wonder the poor fellow was deranged.  He suffered much in his life, loosing two wives leaving him with so many children to care for.  Census records show that these children were farmed out to friends and relatives to raise, a common practice in this time period.

John Good, Jr. was born April 16, 1808 in Bucks County, Pennsylvania where his birth and baptism are recorded in the Nockamixon Church records. The parents are named as John Guth and Regina, of whom I wrote about earlier. His grandparents, Henry and Catherine Good, were the sponsors at his baptism.  He only had one brother, George who eventually moved to the Williamsport, Pennsylvania area.

Census records reveal that he was a farmer.  Jordan said this about him,  "John became a farmer and  was the owner of about one hundred acres of land.  He was a  man held in high esteem,  and was a member of the Methodist  church, in which he was a class leader and steward."  John's son Henry, served his country faithfully in the Civil War.  Henry had a son named George whose son Earl married Edna Frey and had a daughter named Dorothy Alice Good.
Sources:
Please see list of all My Revolutionary War Ancestors
Please see the Index to my “Who's Your Grammie” Blog

This site may be linked, but not duplicated in any way without consent. The copyright on this page must appear on all copied and/or printed material.
Posted by Cynthia Smith on Saturday, December 05, 2020 No comments:

The Illick name was held in very high esteem in my family. The more I researched the story of my 2x great grandparents and their children the better I understood why. My great-great grandparents were devout Christians who met each other at a Methodist prayer meeting.  Samuel Illick and Harriet Kressler were married on June 4, 1842 in  Upper Mt. Bethel Township, Northampton County, Pennsylvania.  They became the parents of 10 children born and raised on their farm, all of whom lead remarkable lives.


The Sam Illick farm was off of what is now Five Points Richmond Rd., on the right side about 1 mile west of Richmond, just before Sunrise Boulevard and back up a short lane.  Sam's father, Christopher Illick, had his farm directly above the Sam Illick property. My mother, Lois McEwen Hughes remembers her grandmother, Clara Illick McEwen telling her that she could walk to her grandfather Christopher Illick's farm which was just over the hill behind their home. 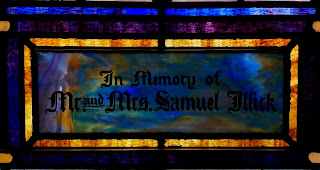 The Richmond United Methodist Church contains a stained-glass window placed there in their honor.  However, Sam grew up in the Lutheran Church and as a young man he helped his father build what is now Trinity UCC church in Stone Church in 1832.  The Brodt history says that when he married Harriet Kressler, an ardent Methodist, he "turned" for her church, something his family did not think too highly of.

They had the following children who were all born at home:

1.     John Theron was born on October 24, 1843.  He was a graduate of Dickinson College, Pennsylvania. He moved out to Illinois where he was elected principal of the high school in Carthage. Later he studied law and was admitted to practice in Burlington, Iowa. He married Martha Cilley and had a family of four children. He died in Burlington, Iowa, on August  30, 1914 and is buried in Aspen Grove Cemetery, Burlington, Des Moines County, Iowa. He was 70.
2.     Josephine Amanda was born on July 22, 1845. After marrying Russell L. Mack on Jan. 20, 1870, they moved to Wellsboro where he had a carriage making business. They were the parents of six children. Josephine died in Wellsboro, Tioga Co., PA, on August 15, 1919. She was 74.
3.     Hiram James was born on July 27, 1847. He became a Methodist minister. He married Helen Kunsman in 1872 and they were the parents of nine children. He died at the age of 75 in Philadelphia on March 23, 1923. He is buried in the Beechwood Cemetery, Hulmeville, Pennsylvania.
4.     Mary Alas who was born on November 9, 1849 lived only 5 weeks when she passed away on December 17, 1849.
5.     Joseph Henry was born on December 30, 1851 and died soon after on Jan. 13, 1852.
6.     Sarah Amelia was born on December 28, 1852.  Aunt Sallie never married.  She was a nurse and was the one who stayed with her parents to take care of them. She lived for a time at the farm of Clara and Henry McEwen. Aunt Sallie died on June 25, 1932 at the age of 79. She is buried at Three Church Hill Cemetery.
7.     Anna Susan was born on October  31,1857.  She married Henry Cox and was a teacher in the Wellsboro, PA school district. Anna Susan died in Lower Mt. Bethel on September 18,1898 and is buried at Three Church Hill Cemetery.  She was 40.
8.     Clara Matilda was born September 15, 1859. She married Henry McEwen on Christmas Day, 1878. They operated a dairy farm and were the parents of one son, Wm. Homer. Clara and Henry were married 64 years when she died on February 20, 1942 at the age of 82.
9.     Charles Kressler was born on September 20, 1861.  A Methodist minister, he married Lizzie D. Hile and was the father of Harriet and Earl. He died at the age of 40 and is buried at the Three Church Hill Cemetery.
10.  Laura Bell was born on July 13, 1864. Aunt Laura was a nurse. As the youngest in her family she became the guardian of the family history.  In her Bible, and in her sister Clara's, I found the obituaries of so many of their brothers and sisters.  The Illick family Bible, now in my possession, was found in the McEwen attic. Since Laura outlived all her siblings, she probably brought the Illick Family Bible to the McEwen farm where she died in 1947. She was 83 and is buried at Three Church Hill Cemetery.

Originally, Sam was buried in the Richmond Methodist Church graveyard, but his daughter Laura had the body reburied at Three Church Hill Cemetery, where she created a family plot for herself, her sister Sally, her parents and her brother Charles and his wife Lizzie. Harriet Kressler was born September 6, 1822. She was the daughter of John Kressler and his wife Mary Seidel. Samuel Christopher Illick was born October 31, 1815. He was the son of Christopher Illick and Susanna Brodt and the Grandson of Stofel Illick and Elizabeth Huber. Sam and Harriet truly left us with a legacy of character and faith to live by.

This site may be linked, but not duplicated in any way without consent. The copyright on this page must appear on all copied and/or printed material.
Posted by Cynthia Smith on Friday, August 23, 2019 3 comments: