U is for United family of Anna Eliza States

Anna "Eliza"  States married  twice, as did her second husband Benjamin Heffner.   But it was out of necessity,  as they both had unfortunately lost  their first spouse. Today, we would call their united families a blended family.

Eliza  was twenty years old when  she married John  Simpson on   February 24th, 1853,   and with him  had four children.  They had been married 7 years when John  died on December 4, 1860,  one month before the birth of their daughter, Jennie.   Wow!!!  It must have been very difficult for Eliza to loose her husband when she had three small children to care for and another on the way.   The 1860  Census Record for John and Eliza Simpson shows  that he was a foreman on the railroad.  They had three children at the time of the 1860 census; Abraham, 6, George, 4 and Cate Simpson, age 2.  They were  living in Walker township, Huntingdon Co., Pennsylvania.

A widow with 4 young children in 1860  needed to have a husband to help her support her family, but it was six years before Eliza  married a second time to Benjamin Heffner  on August 14, 1866.  Ben Heffner's first wife was Eliza Lichenthaler with whom he had nine children; Samuel, John, Joseph, Allison, James, William, Franklin, Marshall and Jennie before she died in 1865.   His  children were still young  when their mother died.  Ben needed a wife to help him care for his large brood.

Benjamin Heffner was said to be a very progressive farmer, cultivating over 200 acres.   He built an impressive brick house and barn on his property to provide for his large family. 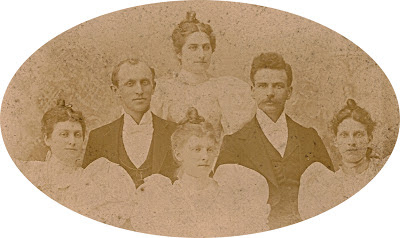 Pictured above are Jennie B., Abraham, George, Ella Mae, Annie and Mary.  Cate is not here. 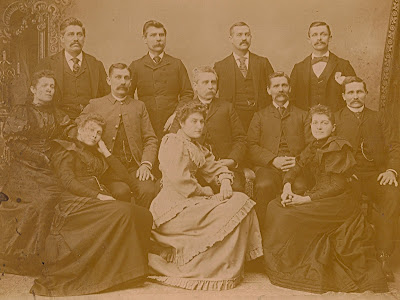 Ben was the father of a total of twelve children.   Eliza's daughters are in the front; Ella Mae, Annie and Mary.   Altogether there were nineteen off spring in this huge blended  family.  They were truly  a Yours, Mine and Ours family!!   Both  Ben and Eliza had daughters named Jennie.   It must have been interesting for my Great Grandmother,  Ella Mae Heffner Long  to have two sisters  with the same name.  I remember my grandmother, Eliza Long McEwen, talking about her Aunt Jennie, but now I don't know which Aunt Jennie she meant. 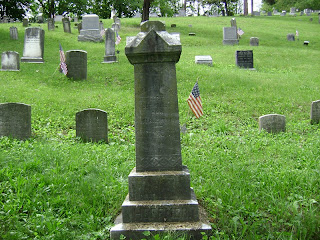