Russell Chauncey was the son of Israel and Elizabeth Petty Chauncey.  He was the father of Sarah Angeline Chauncey Scott.  She is the grandmother who knew our family history like the back of her hand, knowledge she passed on to her granddaughters. My grandmother Zilpha being one of those young ladies.

The earliest records of the Chauncey family date back to the 11th century.  Chauncy de Chauncy (1045) was a Norman nobleman who came into England with the Norman Invasion of William the Conqueror.  Chauncy came from Canchy, Normandy, France.   Since he was a nobleman he may have had a family crest similar to this modern day rendition of the family crest.

Russell Rawson Graham Estabrook Chauncey was given the last names of four of his father's  uncles, all of whom were ministers, when he was born on December 7, 1774, in Canaan, N.Y.  There must have been a whole lot of religion in that family! 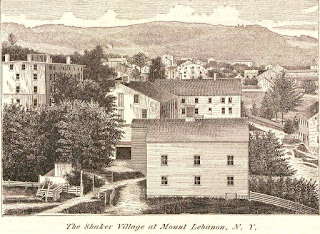 Russell's parents were attracted to the community of the Shakers when he was a youngster.  The Shaker community, founded by Mother Ann Lee, was known for their unusual frantic dancing until the Holy Spirit came down! They lived in separate facilities that separated men and women, practiced celibacy and banned marriage.   Maybe that was the attraction for Russell's mother: no more sex! She had given birth to 7 children by the time they joined up with the Shakers: Rocksena, Cynthia, Levi, Rozzel, Lucinda, Salome and Russell R.G.E. Chauncey, my great, great, great grandfather!

Young Russell was admitted to membership in the Shaker Society when he was 13.  His father, Israel, and grandfather, Charles, had both died 2 years earlier while members of the Shaker's.  Evidently the Holy Spirit came down on them!

So, I know the first thing you are thinking is that since the Shakers practiced celibacy and therefor did not leave any descendants how are we descended from someone who belonged to the Shaker Society!  Well, my great, great, great grandpa Russell R.G.E. Chauncey wised up and left the order on January 4, 1796 after nine years of membership.  His brother Rozzel also left, but the girls all remained with the Shakers throughout their life times.

Russell was 22 years old when he left the Shakers.  He moved to Ashfield, Massachusetts where he met Mable Porter.  They were married in 1802, afterwhich Russell brought Mable back to New York.  They settled in Ghent, Columbia Co., New York, just a few miles south of the Shaker Community in Canaan. 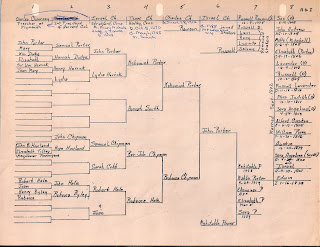 I found this genealogy chart among the family record papers my father, Richard L. Hughes, had kept.  The chart was prepared by his mother Zilpha Estep Hughes. Not only does Grandma show the children of Russell and Mable, but she also shows  the ancestors of the two of them.  This tree most likely  reflects the oral and written history passed down from Sarah Angelina Chauncey Scott. 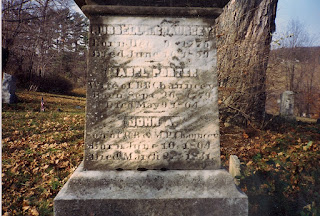 Russell and Mable lived out their old age with their son William R. Chauncey.  They are buried in the Spencer Cemetery outside of Maryland, New York. My cousin Jane Dean visited there in 1994 and shared these photos with me.

So, thank you Grandpa Russell for leaving the Shaker Community and realizing that you wanted to be a family man!  If not, I guess I wouldn't be here to tell your story.

This page  © 2018, Cynthia H. Smith
Send email to chsmith47@yahoo.com
This site may be linked, but not duplicated in any way without consent. The copyright on this page must appear on all copied and/or printed material.

GENEALOGY IS A WORK OF HEART
Your comments and suggestions are appreciated. It is with pleasure that I am able to present this information here for you to see. If you discover a relationship here, I would very much enjoy hearing from you.