I grew up hearing the story of my dad's great grand father, Hosea P. Scott, who had fought in the Civil War.  Dad told me how he  remembered seeing Hosea's old uniform hanging in the attic of their house on Armenia Mt.  As a boy Dad decided to take two of the buttons off the uniform for keepsakes.  Later he was given the Bible that Hosea had in his breast  pocket which took the force of the bullet when he was shot.  Dad said that Hosea always told the story of getting shot and how the Bible in his breast pocket had saved his life.

Hosea's birth date, August 7, 1820,  was recorded by his father, Jonathan Scott, on his handwritten note, "A Reckend of Ages", which was part of the Revolutionary War Pension Records of Hosea's grandfather, Thomas Merritt.  Note to the wise: when tracking down documentation, never leave a stone unturned! Finding the "Reckend of Ages" written in his father's own hand was an epiphany moment for me!

When celebrating a family reunion descendants visited the graves of Hosea and Sarah Angeline Scott at Covert in the Burman Cemetery. Here my father, Richard Hughes (in red sweater) is reminiscing with his cousin, Clem Loomis (wearing white cap).  They often visited their grandparents on Armenia Mountain, Armenia Township, Bradford Co.,  Pennsylvania. 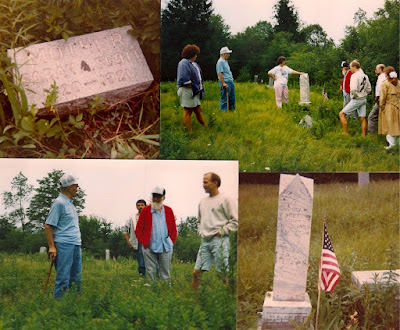 At the age of 44, on Sept. 10, 1864,  Hosea enlisted  in the service to fight in the Civil  War.   He was a resident of East Troy,  Pennsylvania, but went to Elmira, New York to enlist as a private in Company A, 142nd Regiment of New York Volunteers, 3rd Brigade.   He served in the Battle of Fort Richmond, Virginia on December 25, 1864 and on January 15, 1865 fought in the Battle at Fort Fisher, North Carolina where he was wounded by gunshot in the left breast and lung.  He was hospitalized at Ft. Schuyler, NY for three months and furloughed on April 30, 1865.   This YouTube video tells the story of The Battle at Fort Fisher.  Seeing this re-enactment and hearing the story of this battle brought that day when Hosea fought for his country to life.

On May 29, 1900 the County Commissioners Clerk filed a certificate of property assessment in his estate.  Real property assessed in the name of Hosea P. Scott in Armenia Township was 100 acres, with a value of $525.  His personal property included 1 horse valued at $20 and 1 cow valued at $15. His Civil War pension papers describe him as a man of sandy complexion who was 6 feet tall and weighed145 pounds.


GENEALOGY IS A WORK OF HEART
Your comments and suggestions are appreciated. It is with pleasure that I am able to present this information here for you to see. If you discover a relationship here, I would very much enjoy hearing from you.
Posted by Cynthia Smith on Monday, February 27, 2017