James Estep, with determination and fortitude, at the age of 40, decided to bring his young family to the United States of America in 1858. They came to share in the prosperity living here would bring to them.  The Estep family represents the most recent immigrant ancestors in our family tree.  James and  Elizabeth Pritchard Estep, together with their children and others, set sail from Cardiff, Wales.   Ten years after arriving  James filed his Declaration of Intent for citizenship in the United States of America. 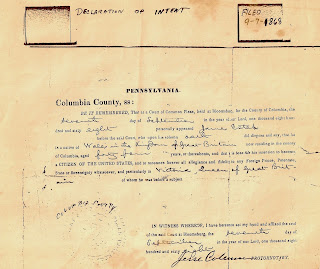 I have searched for a ships record that would document their passage, but have not been able to find one (if someone knows of such, please let me know).  (Please see The Sparkling Wave,  new information  telling the story of their voyage to America)  Before, I had to rely on the oral history passed down via my grandmother, Zilpha Estep, who was the daughter of Charles, son of James and Elizabeth Estep.  The story was told that it was an arduous journey of six weeks, lasting far longer than the three weeks they had expected due to bad weather.  While rations had been provided by the shipping company for the normal length of travel, James had to use his reserved funds to buy food for his family during the extra days at sea.  There were 6 children: Sarah, who was about 10 years old;  Lewis, who would have been about 8; Ann and John who were about 5; William, about 3 years old and the baby, James II, born in 1857.  They were a lot of mouths to feed and preparing meals for   the family fell to Elizabeth.  Passengers in steerage were expected to prepare their own meals with the food provided which included bread, biscuits, potatoes and water.  And that much of the story may have been true, but I discovered in 2017 that the Estep family arrived at the port in New York City aboard The Sparkling Wave, on October 29, 1857.

When their ship finally landed in New York it was necessary for them to travel to Bloomsburg where they were to connect with friends and family already settled there.  Not having enough money left to purchase tickets for everyone,  the men put their wives and children on board the train for Bloomsburg, Pennsylvania while they set out to walk the distance from Philadelphia to Bloomsburg.  It is said that Elizabeth Pritchard Estep had family in the Bloomsburg area.  James and his family lived in the Bloomsburg area until 1869, during which time he worker as a coal miner. 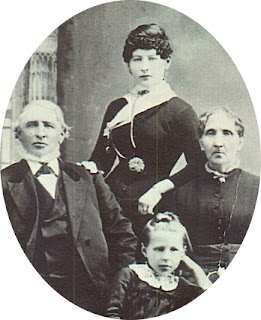 Several more children were born during the time  James and Elizabeth lived in Bloomsburg.  David was born March 2, 1859, Rebecca in 1861, George in 1863, Charles in 1865 and Elizabeth in April of 1867.  Before they left Bloomsburg, James had filed his Declaration of Intent for citizenship in the United States of America on September 7, 1868 at the Columbia County Courthouse in Bloomsburg.

The family left the Bloomsburg area in 1869 to move to Covert, Pennsylvania, an area also known as Armenia Mountain, outside of Troy, Pennsylvania in Bradford County.  James and his sons were all working in the coal mines now, but James also was able to buy land and operate a farm.  It wasn't until August 8, 1872 that James was finally granted his citizenship papers in the Court of Common Pleas in Tioga Co., PA.

One more child came to be a part of the family through adoption. She was Martha, born in 1878 and listed on the Census record in 1880. That is little Martha in this picture with James and Elizabeth and daughter Elizabeth.  Since Lizzie got married in 1888 and Martha looks to be about 6,  I would say this picture was taken around 1884.

James Estep was born in Wales on May 5, 1818. His wife Elizabeth Pritchard  was born, August 16,1822, also in Wales.  They were married November 2,  1845, in Llanover (Llanvoyer) Breconshire, Wales.  He was an Iron Ore Miner in the County of Breconshire, Wales.  James and Elizabeth Estep are now buried in Arbon Cemetery in Blossburg.  In October of 1993,  Lucille Henderson told me that the graves had been moved from the cemetery at Covert where they were first interred to the Arbon Cemetery so that perpetual care could be provided.

The tombstone gives these dates.
James Estep
May 12, 1818 - Aug. 3, 1901
Elizabeth, his wife
Aug. 10, 1826 - ( no death date engraved )
It should be noted that there are several discrepancies concerning the birth and death dates of these two ancestors.

I want express my gratitude to so many people who helped me research the Estep family.  I have compiled this narrative from notes written by my grandmother, Zilpha Estep Hughes Lawrence, and from interviews with her sisters, Angie Estep Loomis and Wilma Jane Estep Ferris, granddaughters of James and Elizabeth Estep. Lucille Loomis Henderson, the first born great-granddaughter of James and Elizabeth Estep, was of invaluable assistance. Also contributing a great deal information on the James Estep I family was Roy Estep on Mansfield, Pennsylvania.  They all loved history and genealogy, but most of all they loved to share their information with me.  It was a joy to have known them all.

Don't forget to follow the links on this page to other posts about members of the Estep Family and see this new page listing the descendants of James and Elizabeth Estep.