OKAY... Estep family descendants and friends!!!  This post is an update of information that I presented several years ago on the family of James Estep. I have found the actual ship's manifest from the Sparkling Wave showing their names and ages when they sailed from Wales and arrived in New York on October 29, 1857!
Family history passed down through the last several generations of the Estep family in Tioga Co., Pennsylvania has always said that the immigration of James and Elizabeth Pritchard Estep to the United States was in 1858 entering through the port of Philadelphia. Contrary to family lore, I have discovered that they in fact landed in New York, not Philadelphia. Believe me, it wasn't easy finding this document!  For one thing, the family name is spelled ASTOP. 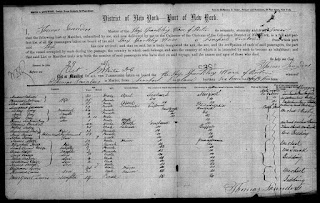 Thanks to the internet and that so many historical documents are now being digitized I found the ship manifest and for the first time now know the name of the ship they sailed on; The Sparkling Wave! This manifest lists the names and ages of all passengers. Take a look by tapping the image here.  It is quite clear that this is the family of our James and Elizabeth Estep since the children's names which were all previously known are listed. James' age is given as 32 years and his occupation is listed as miner (good to know because he and his sons were all coal miners once they came to Pennsylvania).  Elizabeth is shown to be 30 years old on this list. These ages are different from what was previously thought.  Here's what I knew when I made one of my first webpages in 1998:

James was born 5-12-1818 in Breconshire, Wales, the son of John and Jane (Lewis) Estop.  John and Jane had sons names John, Lewis James and George.  They also had daughters named Mary and Rachel.  The children were all baptised in Llanover (Llanvoyer) Breconshire, with the exception of Mary who was baptised again in Llanfair Kilgeddin at the age of two.
John, the father, was listed as a laborer until the 1834 baptism of George.  He is listed there as a carpenter.  He was born in 1794, in Great Whitley, Westershire and died in Llanfair Kilgeddin, Monmothshire in 1860.  He married Jane Lewis, born 1794 in Llanfihangel Cwm Du, Breconshire, in 1814 in the same town.  She also died in 1860 in Llanfair Kilgeddin.  Her parents were Lewis Lewis and Mary ?.  She had a sister named Anne, who was born in 1797 in Llanfihangle, also.
John Estop was the son of John Easthop born about 1760, place unknown, but believed to be Great Whitley.  He married Martha Goodsir, born in 1765, in 1791 at Great Whitley.  He died in 1844 at Llanfair Kilgeddin and she died in 1859, also in Llanfair Kilgeddin.
This is information gathered from Dewi Thomas, of Consultant Ancestral Research Wales by Al Estep (nekkid@hiline.net) who most generiously provided it to me to add to these ESTEP family history pages.
UPDATE:  James married ELIZABETH PRICHARD who was born in Grosmont, Monmouth, England August 16 1824 Christen 14 November 1824. Father William Pritchard, Mother Elizabeth Charles. (provided by Daniel B. Estep at dane26@juno.com)

Imagine you are a 30 year old women, the mother of 6 children aged 9 years to 2 months and you are on board a sailing ship for 6 to 8 weeks heading for a better life in the United States.  Such was the position of my great, great grandmother, Elizabeth Pritchard Estep. The names and ages of the children when they arrived were: Sarah Anne age 9,  Ann Astop age 3, Lewis Astop age 8, John Astop age 4, William Astop age 2 and the baby James Astop age 2 months.  The country of origin is given as England (Wales was under English rule) and their destination is listed as Pennsylvania. They brought with them one chest, one trunk and bedding.  During the voyage they traveled  in the Baggage section of the ship with these very few of possessions from home.

They arrived on the Sparkling Wave at the port in New York City on October 29th, 1857.  I found this  advertisement card on pinterest showing a picture of the ship. Even though this ad is from 1859 and says the Sparkling Wave is next sailing to San Francisco, I thought it was really neat to be able to see exactly what kind of ship the family traveled on. 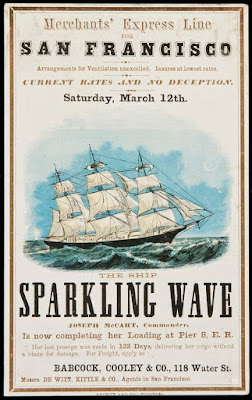 I also found several newspaper advertisements in a Cardiff, Wales paper that listed costs and what was provided for a journey to New York in 1857.  A limited number of passengers were taken on in steerage for the cost of 8 Guineas per person. That  cost included food and water, but passengers needed to provide their own bedding. Accommodations were simple, you shared  space in the hold below deck with other passengers, sleeping on the floor or on your  belongings which for the Estep family were few.  Little privacy there. Imagine nursing an infant let alone being watchful of your other 5 children. Such was life for the 6 to 8 weeks it took to traverse the Atlantic.


Finding this record was not easy.  The family name is written "Astop" rather than Estep.  And their ship arrived in New York, not Philadelphia!  No  wonder it took so long to locate this record!  You may see a list of the descendants of James and Elizabeth Estep here.