Dedication To the Memory of ANNA MCEWEN

I wrote this dedication 20 years ago in 1998. It was one of my first genealogy webpages. Over the years I have had to migrate it's location from a geocities site to a rootsweb site, but now Ancestry.com has bought out Rootsweb and they are dismantling that free site. So once again I am moving it to a new location.  This time with some updates and links to other pages on the Blog and a few pictures.

Dedication of my Genealogy Works

Anna Houck McEwen, I dedicate this genealogy record to your memory. You had so little in life, but two things you held dear; the John McQuown family Bible and the John Houck family Bible; in which were recorded the vital records of your family. For years memory of you was lost, but because you valued the Bibles and saw that they were kept safe, Billy kept them and gave them to his son Henry. Perhaps they were put away in the attic sometime after Henry died, to rest there through Homer's lifetime,while my mother Lois was growing up, until I, your great, great, great granddaughter found them in 1977.
This research was begun in earnest in 1976. Fueled by the fever of the celebration of the country's bicentennial and inspired by Alex Haley's book Roots and John Jakes' series, The Kent Family Chronicles, I began. Grandmother Zilpha Estep Hughes and her sisters had put together some research of their parents lines, especially that of their mother which goes back to the Mayflower. Grandmother Eliza Long McEwen gave me much oral history as well as the opportunity to explore the attic of the century old home of the McEwen's. Seven generations of the family have lived here and it was in the garret that I found the old family Bibles that helped to piece together the lives of so many of them.

Beginning the process of genealogical research in one's own family usually starts by writing down as much lineage as is known to living family members. The next step is to authenticate this information by researching birth, death, and marriage records through old church records, grave markers or family Bibles. By studying this information, coupled with a knowledge of local and national history, it is possible to recreate some of the life stories of our ancestors.

What hardships Great, Great, Great Grandmother Anna McEwen had to endure. Born in 1807, the daughter of John and Elizabeth Miller Houck, her life must have been a simple but demanding one; only thirty some years after the Revolutionary War in rural Pennsylvania.

John, Anna and Sally Ann were a family working hard to provide a home for themselves in 1831. John was probably engaged in farming as were most young men in those days. Two year old Sally Ann tottered along at her mother's apron strings as Anna went about her daily chores of homemaking. Anna must have worked hard to spin the fibers to make the cloth that she used to make their clothing, or maybe she rendered lard to make soap. Garden produce had to be preserved. Did she hang the onions to dry from the rafters, store the vegetables in a root cellar or put up jam for eating during the winter months? Meats were butchered and cured. Was there a smoke house for hams, bacons and venison? Anna probably had a few chickens and gathered the eggs each day. Did John occasionally catch a fish for dinner? As the winter of 1831 passed, Sally Ann was learning to talk. Perhaps John encouraged her to repeat words as they sat in front of the big fireplace that dominated the main room of the house. Anna cooked there at the fireplace, a job that continued all day, to provide meals for her
family. They awaited the birth of their next child.

John McQuown (McEwen) would never know this child, for he died on April 23, 1832, one month short of his 26th birthday. What tragedy befell such a young man? Maybe an accident or illness, no record of the reason for his untimely death has been found. Three months after his death, Anna gave birth to a son she named William, on July 9,1832.

Anna may have found it difficult to provide for William, or Billy, as my grandfather often referred to his grandfather. When Billy was 10 years old, she filed a petition in the court at Easton to have a legal guardian named to care for him. Billy's grandfather, John Houck, was named his guardian in 1842.

In 1850, Anna is found listed with her father and mother on the census. She should be about 43 years of age; perhaps she provided for the care of her aged parents in exchange for living there; they would have been 71 and 66 years old. During this time Anna's son William has taken the name Houck and is listed as an 18 year old shoemaker also living with John Houck.

Record of Anna on the 1860 census indicates that while her father died in 1856 she continued to make her home with her mother, Elizabeth, until her death in  1861. Anna later made her home with Billy and his wife Sarah. As an aged woman of 63, she is found listed with them on the 1870 census.

The date of this courageous woman's death has not been confirmed. It is assumed she died before 1880, as she does not appear on any census records in 1880. Her grave has been located in the Reformed Cemetery in Stone Church, PA. The stone is white and has fallen and broken on the ground. 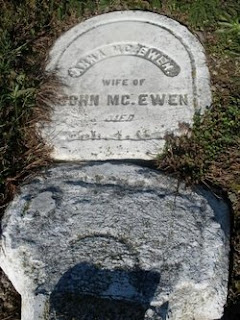 Inscribed  are the words:

ANNA McEWEN wife of JOHN McEWEN
Dates cannot be read. Her grave is in close proximity of several Houck's, perhaps her brother's or other family members. There is an open area beside her grave, space enough to hold the graves of her husband and two children who preceded her in death some 50 years earlier. However there are no markers  present for them.


To your memory, Grandmother McEwen, I dedicate this work.
© 1998 Cynthia Hughes Smith


GENEALOGY IS A WORK OF HEART
Your comments and suggestions are appreciated. It is with pleasure that I am able to present this information here for you to see. If you discover a relationship here, I would very much enjoy hearing from you.
Copyright This page © 2018, Cynthia H. Smith

Send email to chsmith47@yahoo.com
This site may be linked, but not duplicated in any way without consent. The copyright on this page must appear on all copied and/or printed material.
Posted by Cynthia Smith on Tuesday, January 16, 2018