Our ancestor Charles Kunkle almost didn't make it into this world!  He was the third child of his parents, George (1797-1876) and Salome Knecht Kunkle (1803-1825)  and the great grandson of John George Kunkle who gave service in the French and Indian War and the Revolutionary War.
Charles was born November 24, 1825 and his 22 year old mother, Salome, died just three weeks after his birth. It is a  miracle that a motherless infant could have survived in 1825. There must have been a woman with an infant of her own who took baby Charles into her care to feed and nurture him.
The 1840 Census reports that his father was a farmer, so we can imagine that Charles grew up learning the skills of agriculture.
Nothing else is known about Charles until he is the age of 22 when he married Emmaline Miller on July 27, 1847.  The Salem Church Records provides the marriage date and that Emmaline was the daughter of John and Julian Miller. Of course I always like it when a record gives the woman's maiden name. So often that information was deemed unimportant, making it very difficult for the genealogist to discover more about the woman who gave life to the next generation.  And we all know without her none of us would be here. 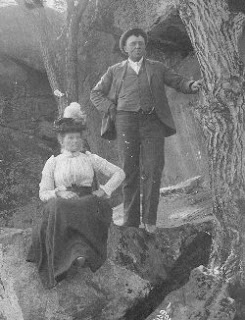 I love this picture of John Henry, son of Charles and Emmaline,  and his wife Sarah Jane Fehnel at Devil's Den in Gettysburg National Park.  John Kunkle lived in Bath, Pennsylvania where he had a farm implement business.  He traveled from farm to farm selling minerals and phosphate.  They were the parents of Estella, Sam and  William.  Estella married Arthur Smith and they were the great grandparents of Ron Smith, my husband.

This page  © 2018, Cynthia H. Smith
Send email to chsmith47@yahoo.com
This site may be linked, but not duplicated in any way without consent. The copyright on this page must appear on all copied and/or printed material.


GENEALOGY IS A WORK OF HEART
Your comments and suggestions are appreciated. It is with pleasure that I am able to present this information here for you to see. If you discover a relationship here, I would very much enjoy hearing from you.
Posted by Cynthia Smith on Tuesday, January 30, 2018