The lives of Valentine and Susanna Miller were two of the first ancestor stories that I uncovered when I first begin researching family history.  Their daughter Elizabeth married John Houck  whose Bible  I found in my grandparent's attic.  The quest to find Elizabeth's parents soon led to the discovery of  Valentine Miller in the family tree. 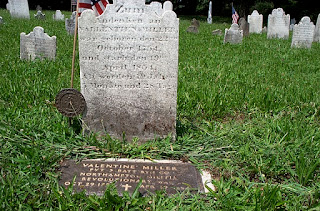 He was a young man of about 22 years when he was drafted into service.  Military records  show that he served two  different  terms  as a Revolutionary War Soldier.

The inscription on the brass plate at his grave site in the Old Union Cemetery  in Upper Mount Bethel Township, Northampton Co, PA  states  he served as a Private in the 3rd Battalion, 8th Company, Northampton Militia.

Valentine Miller married Susanna Laubach  sometime around 1778.  Susanna Laubach was the daughter of Johann Georg Laubach and his wife Margretha.  She was  born  November 27, 1756. Her  baptism record  on December 13, 1756 is found  in Tohickon Union Church, Bedminster Twp, Bucks Co, PA.  Also found on page  893 of the "History of Bucks County": Susanna, wife  of Valentine Miller, the eldest child of John George  Laubach.  Her birth date in these records differs slightly from that given on her  tombstone.  This is often the case  when  records have been transcribed from the old German script in which they were first written.

Valentine and Susanna became the parents of 10 children.  Their daughter Elizabeth married John Houck and had a daughter Anna who married John McEwen.  The McEwen Family of Richmond, Pennsylvania are descendents.

Susanna Miller is buried in the Old Union Cemetery  in Upper Mount Bethel, Pennsylvania.  The inscription on the gravestone  reads  "Susanna Miller, wife of Valintine Miller was born 7 November 1757  and died 5th of January 1837  She was 79 years, 2 months and 28 days old." 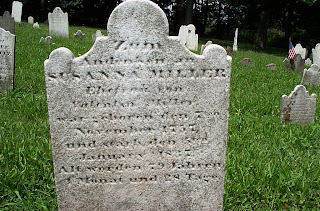