Finding a Family Bible that  has a publication date of 1844, and inscribed inside, "This is the property of John Houck in the year of our Lord, 1856" is a genealogists dream come true.  John Houck and  Elizabeth Mullar were my 4th great grandparents.  Perhaps the Bible was bought the year John died to record family history. The Family Bible is entitled "Die Ganza Heilige Schrist" and is written in German.  There are two different hand-writings on the family records pages. One that records the births of John Houck and Elizabeth Mullar and their marriage is written in the old German script. That may have been written by Elizabeth after John died.

Notice the different hand-writings here.   On the left is the marriage record of John and Elizabeth.  It says, Johannes Houck entered into marriage with Elizabeth Muller on 8th May, in the year of our Lord, 1801, possibly written by Elizabeth.  On the right side, daughter Anna has  written, Anna Houck was married with William McEwen the 6th day of November in the Year of Our Lord, 1828. 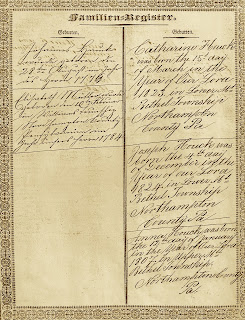 On this page you can also see the two different hand- writings.  On the left side  the birth records of John and Elizabeth are given.  His birth date does not match what is given on his tombstone. Here it says Johannes Houck was born 28th day of March in 1776, but maybe that is 1779.  It looks like a correction was made.

Beneath that entry is Elizabeth's birth record and it provides us with date and place of her birth.  It says, Elizabeth Mulleran was born on the 10th day of February in Williams Township, Northampton Co., Pennsylvania, 1789.  That information was significant to documenting the fact that her father was Valentine Miller.

The last entry on the right side is the birth record of Anna Houck.  Anna must have become the keeper of this wonderful Family Bible. Hats off to you Anna for preserving your family history!


The Houck Family Bible was located in the attic of my grandparents, Homer and Eliza McEwen about 1976. It was stored with a collection of family Bibles of different branches of the McEwen family.

The first evidence of the family of John Houck other than this family Bible record, is found on the 1840 census in Lower Mount Bethel, Northampton Co., Pennsylvania.  There are a number of people in the family including a young boy living there who was probably his grandson, William McEwen, and a woman aged between 30 and 40 on the census who was probably Anna Houck McEwen, his widowed daughter.  It is probable that Anna returned  to  her parent's home after her husband  John died in 1832.  The 1850 census record is a little confusing, as ages of all but 18 year old William Houck (McEwen) are incorrect.  For one thing it looks like William used the family name Houck at this time. He was probably raised in the Houck household all his life and grew up with his mother's younger brothers. At the age of 18, if he was the person the census taker had spoken to, he may not have known correct ages of the others.

Elizabeth is found on the 1860 Census record living in Lower Mount Bethel with  her daughter Anna McEwen. They are next door to Elizabeth's son Michael and his family.  John  and his wife Elizabeth  Miller Houck  are buried in the Old Union Cemetery at Stone Church in Upper Mount Bethel township, Northampton County, Pennsylvania. 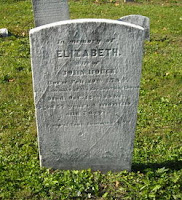 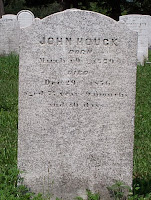 Please see this list of all My Revolutionary War Ancestors

GENEALOGY IS A WORK OF HEART
Your comments and suggestions are appreciated. It is with pleasure that I am able to present this information here for you to see. If you discover a relationship here, I would very much enjoy hearing from you.
Posted by Cynthia Smith on Saturday, May 20, 2017