Have you ever heard of the Hessians?  They were German soldiers hired by the British to supplement their military during the Revolutionary War in their fight against the Yankee Americans.

Well, what do you know, our ancestor, Andrew Correll,  was a Hessian soldier!  I have written about ancestors who fought in the Revolutionary War, imagine my surprise when I discovered one 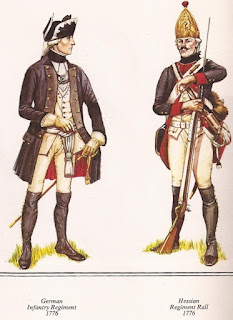 who fought against the colonies.  Andrew Correll was a young man of 26 years who in 1775 was appointed to serve in the Hessian armed forces  Regiment of Reichsfreiherr Wilhelm von Knyphausen during the American Revolutionary War as a private. He was from  Hesse-Kassel in Germany where young men were hired as mercenaries by the British to fight the rebelling Americans.  The 6 volumes of HETRINA (Hessisiche Truppen im Amerikanischen Unabhangigkeitskrieg) contain the names of soldiers from Hessen-Kassel, Hessen-Hanau and Waldeck who served in North America and among them I found:  Corell, Andreas (born circa 1748), appointed as a private to the Regiment of von Knyphausen in April of 1775. From those records he was calculated to be 26 years old.

The record shows that he was wounded in February, 1777 and captured at that time.   The Johannes Schwalm book  provides the name  of Andreas Corell which appears in a compiled list of Hessian prisoner of war soldiers who were marched from Lancaster in 1778 to be exchanged for work with local people. Lancaster Exchange list #1  states that Andreas Correll was assigned to work for George Coyer of Warwick sometime around June 17, 1778.  Apparently Hessian prisoners were held in camps at Lancaster where there was a large population of Pennsylvania Dutch, who treated the German prisoners well. And, why not? These fellows were from the fatherland and spoke their language.  The Hessian POW's were well received by their fellow countrymen and volunteered for extra work assignments, filling in for  local men who were serving in the Continental Army. After the war, many of these men never returned to Germany, but instead remained in American enjoying the liberties of religious freedom and free land, and becoming permanent settlers.

Andreas' period of service is interesting. On four additional occasions  it is noted that Andreas was captured: September 1779, September 1782, November 1782 and May 1783.  The Schwalm book also gives this interesting notice that while he was held at the new goal in Philadelphia he was taken to a hospital on March 26, 1782, but that he ran away from the hospital on April 2, 1782. I'm beginning to think he was an escape artist! It is known that by 1779 he was married to Anna Maria Godhard who was the widow of  Johann Friederich Frutchey and the mother of several children. Which means that he married her while still in the service of the Hessian armed forces.  No wonder he was escaping all those years; the man had a wife and children to provide for!  Together Andrew and Anna Maria had a son John George who born June 18, 1785 before the end of the war.

Tax Records and Census Records help us to track his movements from the end of the war until the time of his death around 1819.  In 1786 Andrew Korrell was taxed in Lower Saucon,  Northampton Co., for 100 acres, 2 horses, 2 cattle.  And again in 1787 the name Andrew Korrell appears on the Lower Saucon tax list.  By 1789 Andrew Correl had  relocated to Williams twp., Northampton Co. where he was  taxed 3.6 pounds for 2 horses and 3 cattle.

Now things start to get confusing regarding the wives and marriages of Andrew.  Andrew Correll  had at least four wives  and was the father of four children as well as the step father to many others.  Andrew Correll married the first time, about 1779 to Anna Maria Godhard.  She brought a number of children to this marriage and together Andrew and Anna Maria  had a son John George, born June 18, 1785.  By 1794, this Anna Maria had died.  She is buried in the Old Union Cemetery, Centerville, Northampton, Co. PA.
Next, Andrew married another lady named Anna Maria.  The second marriage to Anna Maria Schmidt Weidman, the widow of  John Jacob Weidman, as is recorded in  "Forks of the Delaware", "Andrew  Correll of Mount Bettle(Bethel)  with Anna Maria Weidman,  Jan. 10, 1797".  Together  they had three children,  Catherine (1798-), John (1799-1883) and Elizabeth (1801-1891).  It is not known if Anna Maria had children with Weidman.  Anna Maria Schmidt Weidman Correll died June 14, 1803.
Andrew Correll was married third to Christina Gross in First Reformed Church, Easton, Northampton on December 8, 1803.  I have not found a record of any children born to this union.
Andrew must have had a fourth wife named Catherine.  Reference is made to the widow of Andrew Corell  in  the  Records of the Orphans Court in Easton, Book 9 page 269.  The petition of John George Correl, eldest son of Andrew Correl who died  1819,  for the settlement of his father's estate reports the following: leaving widow Catherine and four children.  Children named are  John George, the petitioner;  Catherine, married to Henry Beck;  John and Elizabeth, both minors over the age of 14. Reference to ownership of 167 acres in Upper Mt. Bethel (listed  in Book A Vol. 2, page 373) is made.  Value of the estate was over $8,000.  On page 282 of Orphan's Court Record the final disposition of property is made.  All  lands of Andrew Corell have been sold and the money dispersed  to John George, $2957, John to receive $3060 and the widow Catherine, daughter Catherine and daughter Elizabeth each to receive $758. 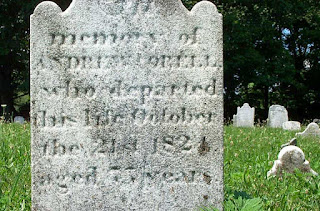 While the household of Andrew Correll is enumerated in the 1820 Census it is most probable that he had passed away.  Even though his gravestone gives a death date of Oct. 21, 1824 the above mentioned petition for the settlement of his estate says he died in 1819.


Josephine Correll, the daughter of John and granddaughter of Andrew Correll was the great,great grandmother of Ron Smith.  Josephine married Henry Good our Civil War veteran.  Their son George married Lillie Deats and had a son named Earl who married Edna Frey and had a daughter Dorothy who married Clarence Smith.


This page  © 2018, Cynthia H. Smith
Send email to chsmith47@yahoo.com
This site may be linked, but not duplicated in any way without consent. The copyright on this page must appear on all copied and/or printed material.