Z is for Zilpha Estep 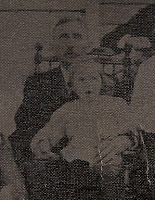 My grandmother, Zilpha Estep was the youngest of the ten children of Charles and Helen Estep.  Here she is sitting in her father's  lap.   Her older brothers nicknamed her "Zip" or "Zippy"  when a small child  because they said she was always running  around.  The name stuck and she was called by that name all her life.  In fact, her grandchildren often referred to her as Gramma Zip. 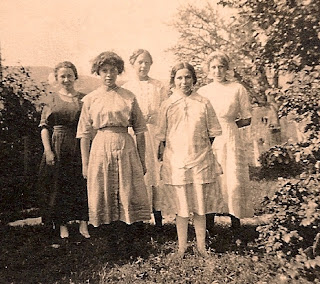 She grew up on Armenia Mountain and in East Troy, Pennsylvania.  Twelve year old Zippy is in the front, right side with her older sister Wilma behind her to the right.  Not sure who the others are in this picture.  Looks like the girls were dressed  for a special occasion. 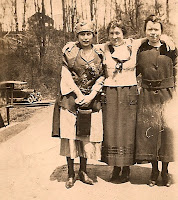 As the Roaring Twenties  Era was about to begin Zip and her friends  were sporting the latest fashions.  That's Zip on the left. Eighteen year old Zilpha is enumerated on the 1920 census with her sister Wilma, 19 years old, at the Cottage State Hospital in Blossburg, Pennsylvania where they were taking their nurses training.  They may have been the first generation of women in the family to attain higher education.

In December of that year  she and Richard Hughes were married in Williamsport,  Pennsylvania.    Dick and Zilpha made a  very handsome couple and enjoyed the fast paced lifestyle of the prohibition years.   Children  came quickly to the young couple.  My father, Richard Lyle Hughes, Jr. was born November 1, 1921.  Loreen arrived on March 19, 1923 followed by Nina Marie on December 29, 1924.    Nina died before her second birthday on November 16, 1926 and soon after that problems complicated their lives and they found it difficult to keep the family together.  It is unclear when they  were actually divorced.  Dad remembers the four of them living together at different times during his youth;  Loreen believes they divorced about 1939 when she was 16 years old.  Even though they separated and finally divorced, I believe they always held strong feelings for each other.  I have fond memories of my grandmother being at Grampa Hughes' lake at Tioga in the summer when we came from Ohio to visit.  He always made her welcome when the family was together. (Gramma Dorotha, his second wife must have been a very understanding soul.)

Zip with her son, Dickie and daughter Loreen, 1927. 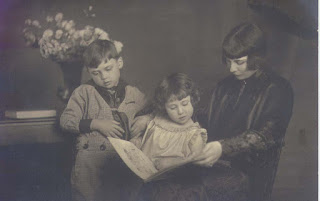 One of the few pictures of Nina, about 1926.   She is buried  in Elmira, NY with her mother Zilpha along side her.


Zilpha Estep Hughes was trained as a practical nurse.  Her life time career took her into the homes of her clients where she lived with them providing around the clock nursing care as long as they needed.  Sometimes this was for the remainder of a clients life.  Her children, Dick and Loreen,  and Nina before she died,  were taken care of in the homes of Gram's sisters and parents. 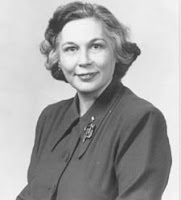 Zilpha was married a second time to A. Norman Lawrence.  She is buried along side Nina in the Woodlawn Cemetery in Elmira, New York.  Zilpha was born on July 23, 1902.  She passed away on August 15, 1978 at the age of 76 years. 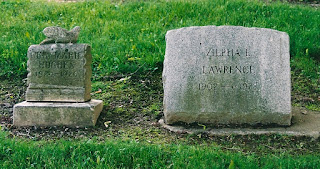