N is for Nana, Salome Knecht

It is difficult to think of someone who died at the young age of 22 years as a grandmother!   Yet she was the mother of three children before she died. 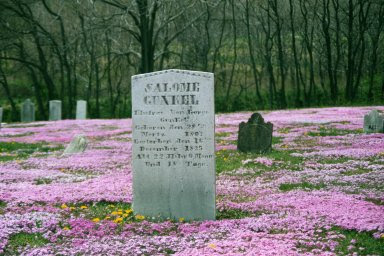 Salome's  grave stone is located at the Moorestown Cemetery, Moore Twp., Northampton Co., Pennsylvania in the old yard at Salem Church.  It is a flat white stone with her name clearly and easily  readable.  It stood as a beacon among a field of beautiful pink flowers  on the spring day when I located the grave.   Salome was only 22 and 1/2 years old when she died December 16, 1825, just three weeks after the birth of her son Charles.  Her stone is in the same row as those of her parents.  It is visible from a distance and is in the lower  center of the graveyard.  The stone is inscribed  in German.
Salome Gunkel ehetran van George Gunkel
Geboren den 28th Mertz 1803
Gestorben den 16 December 1825
Alt 22 Yaren 6 Monat und 18 Tagen.

The birth record for Salome Knecht is located in the  Moorestown Church records.  The record states;   Knecht, Salome, born May 28, 1803, baptised July 3, 1803.   Parents are Leonhard Knecht and his wife Christina.  Sponsors are Peter Stekkel and wife Maria.

Salome's father provided for these children in his will, 1836.  In the will,  Leonard Knecht states, "Salome who had been  intermarried with George Kunkle  who  since departed  her life,  her share I give  and bequeath  unto  her  two  children  Charles and  Catherine."   Lea  had since died.

It is  amazing that  the infant Charles  survived after the death of his mother!   Some unknown woman had to have nurtured and fed him.  Whomever she was we  are thankful to her for  providing Charles  with life sustaining  nutrition.   Salome's  son  Charles  was the grandfather of Estella, whom you met earlier.
This page  © 2013,  Cynthia H. Smith
Send email  to chsmith47@yahoo.co