I always thought Wilson Graver must have been a stinker to have gone off and left his young wife with a boat load of kids to raise. At least that was the way he was portrayed  by his daughter, Beatrice, my husband's grandmother. But after much research I have come to know him better and just maybe he wasn't such a bad guy after all.

He is recorded with his parents on the 1880 census in Franklin Twp., Carbon Co.,PA. Ed Graver is a 45 year old farmer  living with his wife 46 year old Elizabeth who is keeping house. Seventeen year old Thomas is a laborer, daughter Carrie is 11, Wilson is 6 and Sarah is  4 years old.

This tin type picture of the Ed Graver family is a treasure. Here you see Ed and Elizabeth along with Wilson in the middle back row flanked by a brother and sister. I am not sure if the brother is Thomas or which sister this might be. However Wilson was identified; a handsome fella indeed!

Twenty-five year old Wilson married Jennie Lauer when she was still a teenager and needed her father's consent to marry. Jennie had just turned 16 when she and Wilson were married on the 4th of July in 1898. Must have been a shotgun wedding because their first child, Helen, was born five months later on January 4, 1899. A search of census records shows that  in 1900,  26 year old Wilson is married to 17 year old  Ellen J (Jennie), living in  Lower Towamensing Twp., Carbon Co., PA.  with two infant daughters, Helen, age 1 year and Beatrice,  4 months of age.

The fact that Wilson was in Ohio in 1918 is evidenced by his World War I Draft Registration Card which shows wonderful personal information about him. Wilson Sefelen Graver, the son of Edward and Elizabeth Trach Graver, was born  Aug. 15, 1872 on a farm near Lehighton, PA.  His birth date and  middle name were recorded by him on the draft card which was filed Sept. 10, 1918.  Wilson notes that he has blue eyes. He lists his occupation as a bricklayer working for  a construction company and his next of kin is older brother Thomas E. also living  at  118 E. 32nd St  in  Lorain Ohio.  It appears that these two brothers were living together.  Perhaps, he went to Ohio to find work to support his large family in Pennsylvania.

Three of Wilson's  children  are listed as "inmates"  in the Ebenezer Orphanage Home in Seneca Co., Ohio. On the 1920 census Naomi is 14, Ida is 13,and Thomas is 9 year old. Naomi and Ida are known to have been deaf.  So Wilson must have arranged for these children to live at the orphanage and be closer to him.  I have not found a 1920 census record for Wilson so he may have been serving in WWI at that time as he was drafted in 1918 in Lorain Ohio.

Fifty-six year old Wilson is living in Akron Ohio as recorded in the 1930 Census where he  gives his occupation as  bricklayer.  He reports that he is  divorced and was first married at age 25. He is living alone with property valued at $1500.  In 1940 he owned his house at 553 Pricilla St in Akron, Ohio.  The house is valued at $2000. He says he is widowed.  He is a bricklayer.  He attended school through the 5th grade.

He died in Akron in 1954. No mention is made in his obituary that he remarried after leaving  Jennie and the children in Pennsylvania.  He is buried  in Stow Twp. Cem, Summit Co., OH. 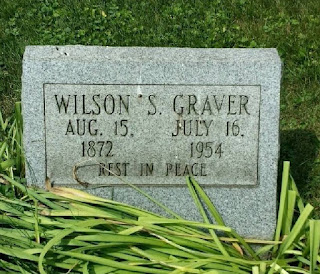 Wilson's obituary was published in the Akron Beacon Journal, Akron, OH on Saturday,  July 17, 1954. "Wilson S. Graver, of 553 Highgrove Blvd, who continued work as a stone mason and bricklayer in his 80's, died Friday night in City Hospital.  He would have been 82 in August. He was active until last summer when he became ill.  Born in Walksville, PA., Mr. Graver lived in Lorain, Cleveland, Columbus and Tuscarwas County before moving to Akron three decades ago.  He was a member of Bricklayers Local 7, AFL.  He leaves four daughters,  Mrs. Russell Smith of Bath Pa,  Mrs. Murv Chester of Madison, NJ,  Mrs. Harvey Crake of Wilkes-Barre, PA,  and Mrs. Naomi Brown of Fort Wayne, IN ;  two sons, Thomas and David, both of Stow; 10 grandchildren and eight great-grandchildren.  Services will be at 2 pm Monday in Degnon Funeral Home, Stow, where friends may call after 7 tonight and Sunday afternoon and evening.  Burial will be in Stow Cemetery.  William H. Degnon Funeral Home, 3333 Kent Rd., Stow, Ohio."

To tell the truth,  I think Wilson was a hardworking man who did his best to provide for his family at a time when work was hard to find in Carbon Co., Pa.   He was trained as a stone mason, an occupation he practiced all his life.  At one time I saw an awesome picture of him standing beside his wooden tool box with a masonry trowel in hand. So maybe he was offered a job in Ohio around 1912. By 1920 he had brought three of his children to Ohio to attend school while they lived in an orphanage. He owned his home in Akron from the 30's until he died in 1954 and his two sons lived near by.  I guess he really wasn't a bad guy after all.

This page  2018, Cynthia H. Smith
Send email to chsmith47@yahoo.com
This site may be linked, but not duplicated in any way without consent. The copyright on this page must appear on all copied and/or printed material.
GENEALOGY IS A WORK OF HEART
Your comments and suggestions are appreciated. It is with pleasure that I am able to present this information here for you to see. If you discover a relationship here, I would very much enjoy hearing from you.
Posted by Cynthia Smith on Friday, April 27, 2018