K is for Kunkle, Estella May

Born on March 1, 1878, Estella was the daughter of John Henry Kunkle and Sarah Jane Fehnel Kunkle.   She was 18 years old  when she married the than 21 year old Arthur Smith (son of Edmund and Camilla Engler Smith ) on May 10, 1896.  They were married by  Rev. W. J.  Andres in Bath, Pennsylvania.  Art was a farmer who rented property  to raise crops and also had dairy cows.

Estella  became the mother of  thirteen  children,  all born at home, and for which the only time she ever  saw the doctor was when he came to the house for their births.  The doctor was paid $5.00 at each delivery.   She was 46 when her last child was born and never entered a hospital until she died.  Two of her sons, Emmet and Herbert died at an early age. 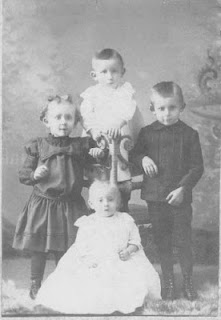 Here are the first four of  Estella's children.  The oldest, Emmet Edmund was born August 3, 1896. (Arthur always said, the first baby could arrive any time, but the rest each took  nine months!).  Helen May, was born July 25,  1897.   Herbert John, came along on August 19, 1899  and Ronnie's grandfather,   Russell Valentine  was born on  September 19, 1900.   These four would be considered a large family by today's standards. 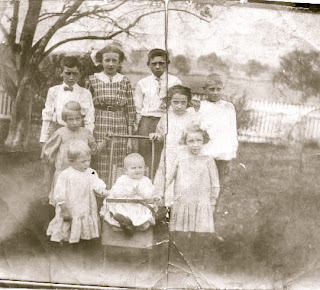 Maybe she thought she was  done having children  by then.  Aunt Eva remembers that her mother did all her cooking and canning on a wood burning stove.  She baked fresh pies and cakes every day.  They didn't last very long since it took at least two to feed her large family at meal time.   Estella was busy with household chores and raising children.  There was plenty of work for all the children to do on the farm. The girls all became mighty fine cooks with their mother teaching them.  And someone had to haul in the wood to keep that stove going!

But babies were still to be born to Estella and Art.  Her tenth child, Franklin Arthur was born  July 27, 1914.  Soon after twenty year old Emmet was injured and died in a thrashing machine accident in 1916, Lillian E.  was born on June 19.    Estella was still changing diapers when she became a grandmother for the first time when Helen's daughter Eva was also born in 1916. 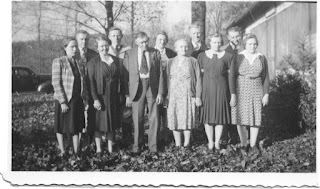 Mr. and Mrs. Arthur Smith of Georgetown, Sunday Celebrated 58  years of marriage.  Mr. Smith holds daily employment at the Keystone Dehydrating Co. and Mrs. Smith does all her own household chores, works in the  garden and plants flower beds.
They  enjoy taking short trips through the country, with short stops to visit  relatives and friends, but most of  their pleasure is brought  when their children  and their families visit them  Sunday afternoons they say.
The couple was married May 10, 1896, by the late Rev. W. J. Andres,  in the parsonage of the Lutheran Church, Bath.  They are now members of the St. John's Lutheran Church, Nazareth.
They are the parents of thirteen children.  Mrs. Helen Williamson, Lester and Walter of Nazareth,  Russell, Bath,  Mrs. Eva Bartholomew, Quakertown,  Mrs. Hilda Werkheiser of Blairstown, NJ,  Mrs. Dorothy Gerhart, Easton, Mrs. Florence Fehnel,  Allentown,  Mrs. Lillian Spohn,  of Tatamy, Franklin of  Mt. Bethel.  Three children preceded the couple in death, two sons, Emmet and Herbert  and one daughter, Mrs. Marie Bilheimer.  The couple have  21 grandchildren and 10 great grand children.  The Smith's will celebrate their wedding anniversary  May 16,  by entertaining their children at a family dinner. 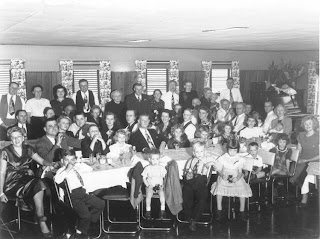 These pictures was taken at the celebration of their 58th wedding anniversary. 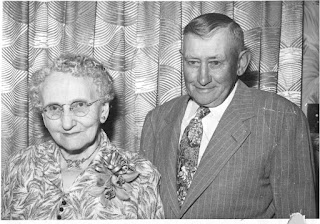 Estella died on Christmas Day, 1966 at the age of 88.  She and Art  had been married  70 years!!!!   They were devoted to each other.  Four years later Arthur passed away at the age of  95.  According to the 1940 census neither she nor Art went to school after the sixth grade. They lead remarkable lives  and are still held in high esteem by those who remember them. 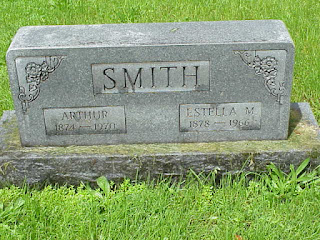 They are buried in Greenmount Cemetery, Bath, Pennsylvania.