John George was born on Feburary 18, 1741 in Flörsbach, Hessen-Nassau, Prussia, now Germany. It is believed that he arrived in America with his parents and brothers and sisters.   They came on the ship Patience to Philadelphia on September 16,  1748.  His father, Johannes,  took the Oath to the Government    at the Courthouse in Philadelphia on September 16, 1748. (Pennsylvania German Pioneers  by Ralph Beaver Strassburger, LL.D., edited by William John Hinke, PH.D., D.D. 1980  Genealogical Publishing Co., Inc. p. 384)  The family located in Northampton County near  what is now the Monroe County line.

This area was considered the frontier at the time.  Families living here were under constant threat of attack by hostile Indian bands who were trying to maintain a hold on their ancestral  lands.  Kunkle family researcher, James E. Kunkle, says, "The first trace of the Kunkel Family in Monroe County, PA is during the period of the   Indian uprisings in the winter of 1755-56 which was the start of the French and Indian  War. The Kunkels are listed, among other families, who fled over the  mountains and who took refuge in the Moravian settlements south of the Blue Mountains.”

John George served in the French and Indian War.  From Candace E. Anderson’s book, Miscellaneous Public Records, 1758 to 1767, p. 142-143 is  found a transcript of the men with their enlistment date and vital statistics.  "Muster roll of men enlisted for three months in the company under the command of Captain Jacob Wetterholt stationed at Fort "Shmit fill" Township for July 1763."     A list  of all the soldiers  with a link  to a photocopy of the original roster is also available online.  It is impressive to see a copy of this 250 year old document and learn that  Johan George Kunkle (number 26 on the list) is described as 21 years old, 6 feet tall, with a long face, gray eyes and Galen hair. Now if I only knew what “Galen hair” color was!

Below is page 264 of the Pennsylvania Archives Series 5, Volume 8. John George Kunkle mustered out of Capt. Jacob Clader's Milita Company on May 23, 1782.  He had served a 3 month enlistment in the 2nd class of the 3rd Batallion, Northampton Co., Pennsylvania. 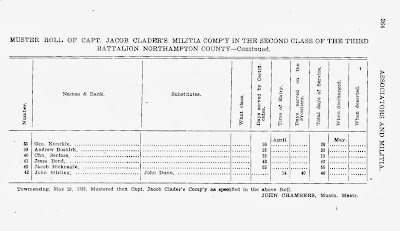 There is a Daughters of the American  Revolution  Record of Service.  He is listed as Ancestor #: A202195.  This record names his wife as ESTER (Esther).  Nothing else is known of her, except that she was the mother of at least nine children.


I located the birth record of their son, John George Kunkle  in the Hamilton Twp., Union Church Records, page 4.


Johann Georg, born Nov. 9, 1769 and baptized April 13, 1770.
The sponsors were Johann Guldner and Christina Kunckelin.
This record also provides us with the correct name of his father and gives the mother's first name.  However, no maiden name is provided for Ester.