Henry Good fought in the Civil War at  Gettysburg where his name appears on The Pennsylvania Monument.   The picture here is of a young Henry in uniform with his weapon.  He was a private in Company K of the 153d Regiment from Lower Mt. Bethel, 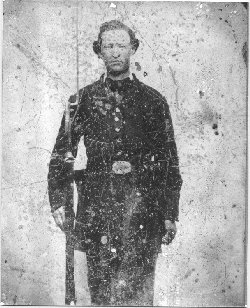 Northampton Co., PA, under Captains Isaac Johnson and Isaac Buzzard.  He enlisted on Oct. 11, 1862 when  he was 21 years old.  Records indicate that he was not injured in the fighting.  Which was a good thing, because many were.

The PA 153d engaged in battle at Chancellorsville,VA on May 2, 1863 and at Gettysburg, PA in the infamous battles of July 1863.   The 153d was an infantry company.  There is a monument at Gettysburg  to their honor on Barlows Knoll,   where they  fought in the Battle of Cemetery Hill.  Company K  from Lower Mt. Bethel mustered out on July 23, 1863. 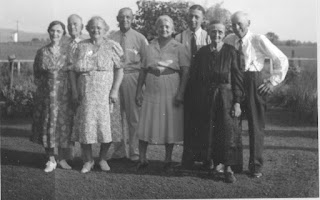 Here is a wonderful picture of the adult children of Henry Good, taken before 1942, the year Simon J. Pysher died. As far as I know, they are from left to right: Bertha and Clarence Johnson, George and Lillie, Martin and Martha, and Annie and Simon J. Pysher. William is missing.


All his life, Henry Good showed that he was a man who accepted the  responsibilities  that were his.  We see his Civil war record.   From the census records it can be gleaned that Henry Good  understood the obligations of family.  He was the middle son of the 12 children of John Good, Jr. and the Grandson of John Good, Sr.

Throughout his adult life he is seen providing a home for members of his family. In 1870 it is noted on the Census that the family of Henry Good, age 29 included his wife Josephine, age 24, baby Anna C., age 8 months as well as his brother Enos, age 14 and his father, John. On the 1880 Census, the Henry Good family includes Josephine, Annie C., age 11,  Emma A., age 8,  William H., age 6 and John A. , age 4,  as well as Josephine's parents, John and Catherine Correll. The 1910, the Census reports that he was employed as a wagon driver for the Coal Co. His obituary says, "Deceased was a pioneer member of Miller’s Church, near Flicksville, and served a number of terms as tax collector in Lower Mt. Bethel Township.  He was a member of Albert Jones Post. G. A. R. of Bangor.  For twenty years, Mr. Good was in the employ of Milton Flory, of Bangor, as a driver." 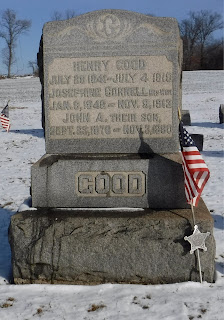 Henry and Josephine Correll Good are buried in the Miller Church Cemetery on Heinsone Hill Rd. in Lower Mount Bethel. The little one room church known as the German Methodist Church or Methodist Episcopal Church is no longer there.  It was said that members were very devout Christains who remained in their service until the Holy Spirit came down among them.

Josephine was the daughter of John Correll and Catharine Eilenberger Correll.

This family is full of men named Henry, John and George.  I have told the story of  Henry Good (1764-1829), our Revolutionary War Veteran.  And his son, John, Sr. Our line of descent continues from John, Sr. to John, Jr. (1808-1871) of Lower Mt. Bethel.  From there we have this Henry (1841-1919) of Civil War fame, whose son George was Ron's Great Granddad.  George and Lillie Good had a son named Earl who married Edna Frey. Their daughter Dorothy married Clarence Smith.  Dot and Clarence were the parents of Ron Smith.


This page  © 2017, Cynthia H. Smith
Send email to chsmith47@yahoo.com
This site may be linked, but not duplicated in any way without consent. The copyright on this page must appear on all copied and/or printed material.


GENEALOGY IS A WORK OF HEART
Your comments and suggestions are appreciated. It is with pleasure that I am able to present this information here for you to see. If you discover a relationship here, I would very much enjoy hearing from you.
Posted by Cynthia Smith on Tuesday, January 17, 2017