You have heard of the Minute Men in Massachusetts; men who were enlisted in the armed services, going about their daily lives providing for their families until there was a call to arms when they dropped everything to  go into battle against the British.  But did you know that  men in the  neighboring  state of New York also were  called to duty in the same fashion?

My ancestor, Thomas Merritt was one of those soldiers serving as a private  in the 8th Regiment,  Albany County, New York, Militia  under the command of Col. Robert Van Rensselaer.  He is also found in the list of men identified as having served The Militia (Land Bounty Rights) Ulster County, Fourth Regiment  and  The Militia Orange County, Fourth Regiment.   "The Militia was called out when wanted; kept as long as wanted, and the soldiers then sent to their homes. Sometimes a regiment or a part of a regiment would be called out half  a dozen times in the course of a year, and for half a dozen days at a time, and again it might  not be needed in the entire year.  Officers and men seem to have served in different organizations  almost indiscriminately.  At one call, they were in one regiment or company, and at another call,  in another regiment or company."  New York in the Revolution as Colony and State, 3d ed., 2 vols. (Albany: 1904), pages 10, 166, 265.

Thomas  reports in his  affidavit for Pension filed in 1833 that he first volunteered as a minute man and held himself available  for service of his country until the end of the war. According to his pension, he was in Captain Gore's Company, Col. Clinton's Regiment, NY Militia.  Among his tours of duty he  attests to being at Fort Montgomery  protecting the Hudson River near West Point  from advancement by the British.  And  at one time he marched to New Jersey  for service there.

Records show that Thomas Merritt was  born February 13, 1758 in New Marlborough, Ulster County, New York.   His parents may have been James Merrittt and Martha Bloomer.  After the war he came to Sugar Creek, settling in Troy, Bradford Co., Pennsylvania before 1812 and there continued to reside until his death on November 23, 1834.  He was married to Anna Ayers.  Anna attests to her marriage to Thomas Merritt in the Revolutionary  War Pension papers filed  for Thomas' pension.  In the records,  Andrew Ayers attests that he is the brother of Anna Merritt.  Anna attested that she was the wife of Thomas Merritt having been married November 9, 1784.  Anna  Ayers Merritt said that she lived in Coeymans, NY as a child. She was born November 9, 1761.

A son, James was born April 25, 1792.  James attested in the Pension Application Papers  that he often heard his parents tell that they were in New York when General Washington landed there for the  dispatching of the army at the close of the war and that they were married previous to that period.  A daughter, Abigail, was born on September 16, 1796.


Thomas and Anna were married 50 years before he passed away in 1834.  They are  buried in  the old section of Glenwood Cemetery, Troy, Pennsylvania. 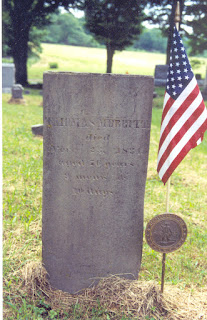 His grave is marked with a plaque and flag honoring his service in the Revolutionary War. 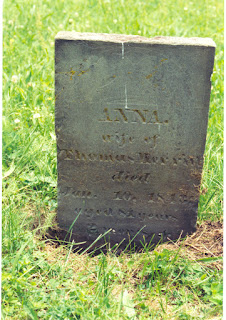 Sarah Merritt, daughter of Thomas and Anna,  married Jonathan Scott.  Jonathan  provides a  record of ages for himself and his family in Thomas Merritt's Pension Application Papers.  In Jonathan's own hand writing  we can see  the name of  his son Hosea, who married Sarah Angeline Chauncey.  Sarah Chauncey Scott was the mother of Helen Scott Estep, my great grand mother.