On this page is a handwritten note listing the names and ages of the family of Jonathan Scott and his wife Sarah Merritt Scott. In his own handwriting Jonathan Scott reports his birth date  and those of his wife and children in a document that is part of the Revolutionary War  Pension Record  of his mother-in-law, Anna Ayers Merritt, who was the  mother of  Sarah Merritt, Jonathan's wife. The Revolutionary War Pension Record for the widow of Thomas Merritt  contains family records of Thomas and Anna Merritt's children and their families.

Jonathan Scott and Sarah (Sally) Merritt came from Bennington, Vermont.  They first lived in Warsaw, New York before moving to Troy, Pennsylvania.  When they arrived in Troy in 1811 it is said that there were only three houses in the town. 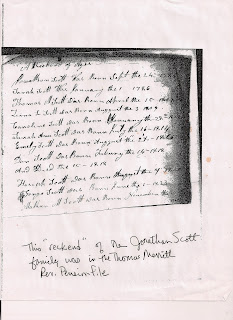 This document provides a definitive birth date of September 24, 1784 for Jonathan Scott. Most historians have used the date December 24, 1784.  It is probable that Orrin Peer Allen in recording the family of Matthew and Sarah Scott in his book "Descendants of William Scott of Hatfield, Mass. 1668-1906 and of John Scott of Springfield, Mass., 1659-1906"  recorded a baptism date  for Jonathan.

That said, I want to clear up a  long standing myth regarding Jonathan Scott.  Family historians have long thought that he was the son of Zerah Scott.   But his name does not appear in the list of children born to Zerah and Sybil Scott as is  recorded in The Revolutionary War  pension application records of Zerah.   The records contain an account of Zerah's children as recorded in the family Bible.  Zerah's children were:

Since Zerah and Syble were married August. 3, 1786 in Bennington, Vermont, our Jonathan Scott, born September 24, 1784,  could  NOT  have been his son.  Zerah, born October 8, 1765 in Bennington, Vermont  was his oldest brother. There was an  age span of about twenty years  between these brothers. They were the sons of Matthew and Sarah Scott. I believe that Zerah may have taken in his  younger brother to be reared by him.   Jonathan very well may have been raised as the oldest child in Zerah's family and he  may have looked to his older brother as his father.  Therefore the confusion in the reported family history.

It is estimated that Jonathan and Sarah died before 1860 as they appear on the 1850 census, but not on the 1860 census. Family histories note that Jonathan is buried in the old  cemetery at Troy. I have not located the grave or a transcription of gravestones in that cemetery.  If anyone has knowledge of such, please contact me.

1. Written family history passed down to me from my grandmother Zilpha Estep Hughes.

I welcome your comments. Please consider joining this BLOG as a follower or member.
Copyright
This page  © 2013, Cynthia H. Smith
Send email to chsmith47@yahoo.com