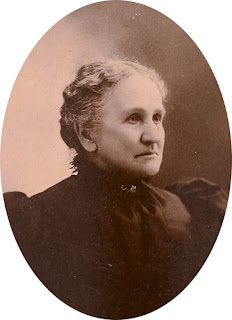 A note from her obituary states,  "She was born on the spot where the Tioga Junction Depot now stands,  a mile and a half from where she died."  Harriet was born October 18, 1822 at Beecher's Island, Tioga Co., Pennsylvania.  You can read  the Blog post for the VanWey Homestead here.

Harriet C. Van Wey  was the daughter of Henry Van Wey and his wife Elizabeth Middaugh, a daughter of Elias Middaugh.  The Van Wey and Middaugh families were of Dutch descent and were among the first  families to settle in the area  of Tioga Co. Pennsylvania.    Her older siblings were Phoebe, Sally, Hannah and John.  While she was raised in a family of mostly girls, she became the mother of a large brood of boys.

When she was twenty - five years old Harriet married Frederick Hughes  on June 17, 1847.  Her first child, Henerietta was born several years before they were married. Once married,  Harriet and Frederick didn't waste any time enlarging their family.  Benjamin was born May 23, 1848 followed by Betty in 1850, Phoebe in 1852, George in 1853 and Frank in 1854.  Charles Frederick arrived in 1856, then came Simeon (my great grandfather) in 1858.  A little girl Harriet was born in 1860, but died young.  The family was rounded out with the birth of three more boys, John in 1861, William K. in 1864  and Frederick Jeptha in 1865.  I think it is safe to say that Harriet had a full time job  taking care of her family. It is said that this picture was taken about 1884.  Funny none of the daughters were invited to be in the picture!  The "boys" in the back row are Frederick, Frank, Charles, Simeon, John and George.  In the front row are William K., Harriet, Frederick and Benjamin.   The brothers were often referred to as the Hughes boys even into their adult years.  They are remembered as a lively bunch and I am sure Harriet had her hands full raising them.


The stories Daisy Miller recorded in her recollections of her father (William K.) and uncles   provide a wonderful glimpse into the past.  Daisy says, "All the boys slept in double beds, 2 by 2, in a large room over the kitchen, hot in the summer, warm in the winter.  Each oldest boy took into his bed the youngest.  The big farm house had a porch at the front and back with large rain barrels to catch the warm rain.  The boys used them in warm weather to take baths."

Daisy tells that the  brothers played jokes on each other constantly, but Sim played one on himself.  One Sunday in Spring, the boys, after riding in the pasture came upon a hen sitting on eggs in a nest. The eggs looked clean and fresh.  Sim said, "Now I'll show you boys how to suck eggs."  He grabbed one from under the hen and throwing back his head, broke the egg on his teeth and swallowed the contents - the  egg had been too long under the hen.  Sim learned a lesson and his brothers never let him forget it. 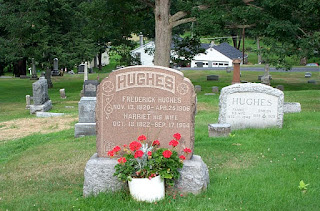 Harriet lived a long life.  She died  September 17, 1904 at Mitchel's Creek at the age of 81.   She and Frederick are buried in Evergreen Cemetery in Tioga.  At the time of her death, in addition to her twelve children, she was also a grandmother of  forty-six grandchildren and four great-grandchildren.   My great grandfather was Simeon who married Fannie Westlake.  You must have had a wonderful sense of humor, Harriet,  to have raise  that bunch of boys!