W is for Wilma Jane

Wilma Jane Estep Ferris is not a grammie of mine,  but she wet nursed my dad, Richard Hughes,  when he was an infant, so she needs a little credit here for helping to sustain and nourish him.

Great  Aunt Wilma, who  was born July 9, 1900, was  my grandmother  Zip's closest sister age wise.   They were the youngest daughters of Charles and Helen Estep of East Troy, Pennsylvania.   They attended elementary school together in East Troy and after graduating there, both girls went to school for nurses training. 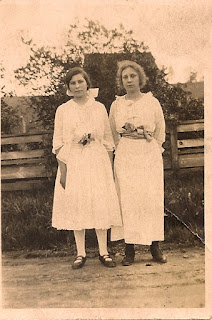 Here is Wilma on the right with her younger sister Zilpha, nicknamed "Zip".  This picture was taken about the time the girls were middle school age, maybe in their early teens.  I love their dresses and the big bows.

Wilma met Curzon Cady Ferris  after  her family had moved to Elmira, New York.  This was about the time the sisters were doing their nurses training at Robert Packard Hospital in  nearby Sayre, Pennsylvania.   They were  married September 1, 1920.  Zilpha and her finance, Richard Hughes  witnessed the ceremony.


Wilma and "Tony" (as Curzon was know by) settled into  marriage raising a family of four boys.  Curzon Cady Ferris, Jr. was born November 5, 1921  four days after Zilpha had given birth to Richard Lyle Hughes, Jr., my dad.   Both young mothers were  working as practical nurses and helped each other out  with child care.  When meal time came around both boys were were nursed by which ever sister was providing care, thus "wet nursed."

Charles Earl, known as Chuck was born August 24, 1924.  Next was Arthur  in 1930 and then James in 1933.  The family made their home on Lockhart Street in Sayre, Pennsylvania.  Her granddaughter, Becky says she wasn't much for gardens and household chores, "she was a terrible cook except the cherry pie...  running joke in the family was, if a diner sign advertized 'Like Gramma's home cooking', we didn't stop."   Becky says she was just a  "Plain Jane"  for sure.


Wilma enjoyed spending  time with her family , especially her sisters.  Together they belonged to the WCTU,  researched the family tree and joined the DAR.

Wilma and Tony Ferris were married 49 years when he passed away on September 2, 1969.  Wilma Jane lived to be 87 years old.  She died January 20, 1988, the last of her family to cross over to the promised land and join her grandmother Sarah Angeline Scott   as  Grandmother Scott had written that she would meet us all in Heaven one day.  My father traveled out from Ohio to attend the funeral of his beloved aunt and spend cherished time visiting with his Ferris cousins, whom he dearly loved. 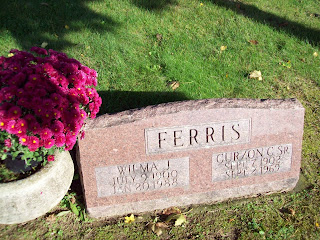 I think of Great  Aunt Wilma every time I make a jug of sun tea on the front porch on a bright sunny day.   She and Curzon are buried at Tioga Point Cemetery, in Athens, Bradford County, Pennsylvania.