This picture card was part of a collection of family memorabilia belonging to my father, Richard L. Hughes, Jr.   The letter on the reverse side was written to my great grandfather, Simeon Hughes of Tioga, Pennsylvania.  My mother made the note at the top of the letter on the reverse side that she thought it was a rendition of the Hughes homestead. That is mother's handwriting.  But alas, dear Mother, you were wrong about that.  A little internet sleuthing found information about the author of the letter, poem and drawing  Louis E. Cooke,  and I discovered he was quite the fellow in his day.
Here are the Clues:
1. In the poem he talks about experiencing travels far and wide.
2. The title gives his birth date, May 17, 1850 and says "The place where I was born".
3. In the letter he asks Sim if he remembers the old log house implying a shared relationship.
Fact:
1. Louis E. Cooke is not a  son of Frederick Hughes nor a grandson of Jeptha, as none of Jeptha's daughters married a Cooke.
Assumptions:
1. He could have been related to Fred's wife Harriet Van Wey.  Her obituary states that she lived and died in the same location, which was Jackson township, Tioga Co. PA
2. If Louis E. Cooke is a relative of Harriet Van Wey Hughes, than this drawing may be the  Homestead of her parents Henry Van Wie and Elizabeth Middaugh.
Research: 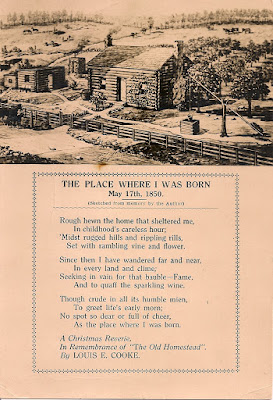 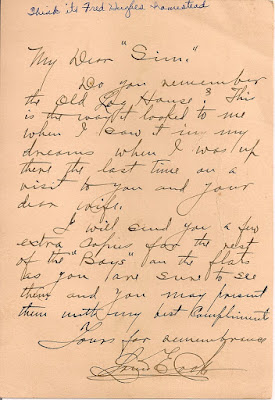 A census search for Louis locates him in the family of Lewis E. Cook, age 46  of Jackson township, Tioga Co.PA in 1850.  He is an infant listed as Edwin.  This makes sense; he is named for the father, Lewis E. Cook.  His mother's name is Phoebe.

Another search found the "Reminiscences of a Showman",  A series of weekly articles written by Louis E. Cooke where he tells about his life and experiences with the Wild West Show.  In his June 3 article he tells that he was born in Jackson, Tioga Co. PA and that the family moved to Michigan when he was 6 years old in 1857.  While he doesn't mention his parents by name he states that his mother died 2 years after the move to the wilderness of Michigan.  (These articles are very interesting to read!)

The New Jersey Historical Society, has a Scrapbook  that shows Cooke, Louis E. (1850-1923), circus agent, hotel proprietor, Newark, N.J.  The scrapbook contains many pictures, etc. of the circus and Louis'  contacts while reporting with the circus. Definitely,  our Louis E. Cooke was a man who traveled world wide working with the circus and the Wild West Show.

Now a look into my genealogy software program for Lewis E. Cook (the father) and what do you know!  There he is.  My records show that he is married to Phoebe Van Wey, a sister of my great, great grandmother Harriet who married Frederick Hughes!  Aha! We have the connection;  Louis E. Cooke was a cousin to Simeon Hughes, my great grandfather.  Their mothers were sisters, daughters of Henry VanWey and Elizabeth Middaugh!

Conclusion:
This picture above, therefore, must be the homestead of Henry Van Wey and his wife Elizabeth Middaugh.

Do any of my siblings or Hughes cousins remember Grandpa Hughes mentioning that he was a cousin to the famous Buffalo Bill Cody of the Wild West Shows?

When I was a child my family took many camping trips across the country.  When we were in Cody, Wyoming, Dad told us that we were related to Buffalo Bill Cody, but he didn't know how the relationship went.  I have tried several times to find that connection.  What kid of the 50's wouldn't want to discover a famous cowboy was a relative? Not so.  Buffalo Bill Cody has no relationship to the Hughes family.

Here is my theory.  The stories  of cousin Louis Cooke must have been pretty exciting tales when my grandfather was growing up.  I  imagine good old cousin Louis returned to Tioga,  Pennsylvania to visit his family there and shared some of his adventures with the Wild West Show.  It is likely that Grampa Hughes  remembered  hearing these stories about Buffalo Bill and the Wild West Show and by the time we kids were growing up the reminiscences had evolved into  thinking that it was Buffalo Bill who was Grampa Sim's cousin.  We have Louis Cooke, the adventurer and circus agent, friend of Bill Cody, but not his cousin.  Well, that's OK, because this was a fascinating piece of research to work on and I am happy to have not only discovered the truth here,  but also am able to identify  the  homestead in the drawing Louis made.