WHY?  Well for one thing I don't have a Y grammie, but  why not talk about Camilla and how I went about researching her story. It is always a challenge to find a women's birth name and determine the names of her parents.  Often her maiden name is lost and it takes some detective work to search for records that will provide clues to the names of her father and mother.

Camilla is Ron's great, great grandmother Smith.  Her name had been passed on to me in the Smith family reunion records kept by his grandmother Beatrice Graver Smith.  This awesome picture of Camilla at work in her garden was given to me by her granddaughter and namesake, Eva Camilla Smith Bartholomew. 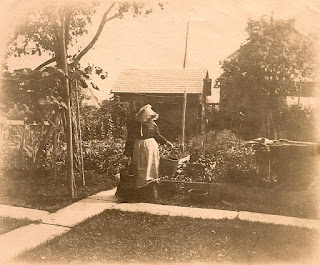 I knew her last name had been Engler, but I did not know her father's first name. Using the online obituary index for the Easton Newspapers available at the Easton Library in Easton, Pennsylvania,  I located an obituary for Camilla Smith in the Easton paper on microfilm.  The date for the obituary was a close match for her death date, April 7, 1922.  The obituary provided good clues in the hunt for her family.  Among her survivors was one brother, Frank Engler of Carlton, Oregon.


Using that information I searched Heritage Quest online for a census record.  I was looking for a family  named Engler with a daughter named Camilla and a son named  Frank.  Searching all Englers in the Bethlehem, Pennsylvania area on the 1860 census, I finally found the family of  Michael Engler, age 53, Bethlehem twp. Northampton Co., PA.  Camilla is listed as a 14 year old in this family (this age fits for her birth date of October 6, 1845).  Her brother Frank is listed as  Franklin, age 10.    I also learned that Camilla's mother was named Dorothea.  Additional  internet research, for an obituary for Micheal Engler  proved  that Dorothea's  maiden name was Kocher.  VIOLA!!!  Found another  "Grammie"  tree to climb and so my research efforts are never ending...  but on to the story of  Camilla.


By 1870 Camilla was married to Edmund Smith.  Like her, he grew up on a  farm.   Both of their  families  were hard working German speaking people known  as the Pennsylvania Dutch.   Pennsylvania Dutch  was spoken in their homes  through out their lives.   Some of the older members of the family still have the "Dutchy"  accent in their voices today.   Speaking English was a noteworthy  item on census records.  The 1900 Census  reports that Camilla could not write or speak English, but could read it.  Also it is learned that she was the mother of two living children in 1900 and  that she and Edmund had been married for 30 years, which figures to a marriage date circa 1870. 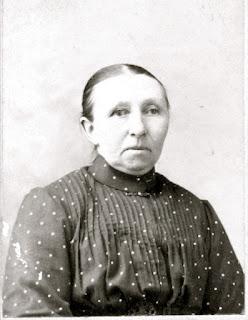 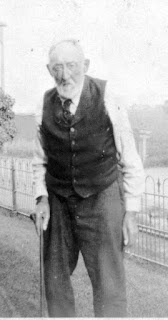 I have not located a record for their marriage.   However they are listed  as sponsors at a baptism in 1868, so they were a couple by then.  On the 1910 census record, Camilla reports that she was the mother of three children.  Burial records at  St. Thomas church, Altonah cemetery  show an infant, Edmund Smith, who died in 1871. This could very likely be their son.  The baby's grandparents, Valentine and Caroline Smith,  are also buried in the Altonah cemetery.

Camilla did have two other children.  Her son, Arthur, who married Estella Kunkle,  was born on October 18, 1874.  Camilla's daughter,  Florence Mae,  was born May 11, 1879.  At a time when women had one baby after another, as we have seen with so many of the grandmothers whose stories I have told here, I wonder  why Edmund and Camilla only had three children.

Edmund and Camilla Smith   instilled strong religious values in their children, Arthur and Florence.  They enjoyed attending the Moorestown Reformed Church once a month for a high German  service.  Uncle Franklin once told me that he remembered when he  and his father and mother attended those services with them.     Camilla lived to be  77 when she died  in 1922.   Edmund died  three years later at the age of 90.

They are buried in  Greenmont Cemetery on Rt. 248 in Bath, Pennsylvania.   Her name is spelled COMELIA on  her gravestone.  Don't know WHY. 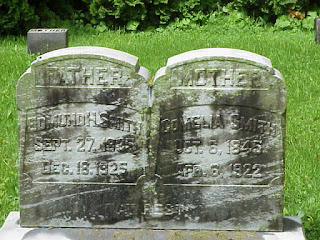