The obituary notice of Frederick Hughes was published on the front page of the newspaper accompanied by a two column photograph of him.  It states... 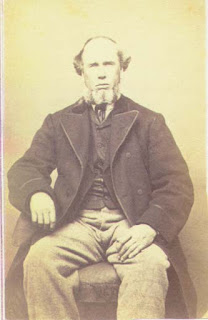 "The venerable and widely known subject of this sketch was one of the oldest and most highly respected citizens of Tioga County. He was born in Hughesville, Lycoming Co., Nov. 13, 1820 and died at his home at Mitchels Creek, April 25th, 1906. He was the oldest son of Jeptha and Betsy Hughes who came from a thrifty Pennsylvania German stock .

When four years of age Mr. Hughes came to this county with his parents and settled in the Covenesque valley near the present village of Nelson. About 1840 he walked from Laweranceville to Covington and there at the Bingham office, took up 60 acres of land at Mitchels Creek. From this he kept branching out until at the time of his death he and his children owned, in that vicinity about four square miles of the best farming lands of this county.

On June 16, 1846 he was married to Harriet VanWey who died about a year ago. Twelve children were born to them, nine of whom are still living. George, Frank, Charles, Simeon, John, Will, and Betty Meeker - all live near Mitchels Creek; Fred of Denver, Col., and Mrs. Phoebe Gaige, of Mansfield, Pa. Benjamin, Henrietta, Harriet are not living. There are also forty -six grandchildren and four great-grandchildren.

Mr. Hughes left his parental roof when a mere boy with a determination to make his own way in life. He was always a hard working man and success crowned his every effort. He was keen and shrewd in business, but honorable and upright in every transaction. He was a devoted husband and a loving father whose wise counsel will be greatly missed by his children, who although well advanced in middle life, always looked to him for advice.

There is a vacancy in the old homestead that will be felt more keenly as the months roll on. But there are fond remembrances of such men and hope of a future reunion. The funeral was very largely attended at his home Friday afternoon." 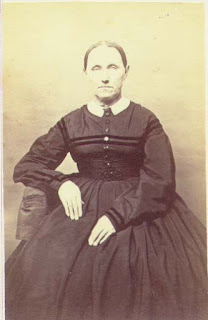 He married Harriet Van Wey in Tioga, Pennsylvania. Harriet was born October 18, 1822 and died September 17, 1904 in Tioga.  At the time of her death, in addition to her twelve children, she was also a grandmother of   forty-six grandchildren and four great-grandchildren.

A note from her obituary states, "She was born on the spot where the Tioga Junction depot now stands, a mile and a half from where she died."

She was the daughter of Henry Van Wey and his wife Elizabeth Middaugh. The Van Weys and the family of Elias Middaugh, her grandfather were of Holland Dutch descent. Information found in the article "Chief Settlers between 1820 and 1830", located in  the book, Tioga Township and Borough, by Henry H. Goodrich mentions Henry Van Wey as one of the earliest settlers in the area.  "Dr. Pliny Power came and settled for a time with his brother Dr. Simeon Power, both of whom were early settlers in Lawrence Township; ... Following him in the order of settlement at Tioga, as near as can now be stated, were Henry Van Wey, lumberman and farmer..."

Harriet's brother, John Van Wey, married Polly Hughes, sister of Frederick Hughes. These two families and Jeptha Hughes are neighbors on the 1850 census in Lawrence twp., Tioga Co.   For many years, her granddaughter Phoebe Hughes Button was the family historian.  Phoebe's  notes in the record book of the Hughes Reunion states that Harriet's  father's name was Henry Van Wey  and that  her mother's was Betsy.
Frederick and Harriet  are both buried in Evergreen Cemetery, Tioga Pennsylvania.  Three generations of the Hughes family are buried here.   Their gravestone is in the same location as that of Frederick's father and mother, Jeptha and Betsy Hughes, and Frederick's son, Simeon. 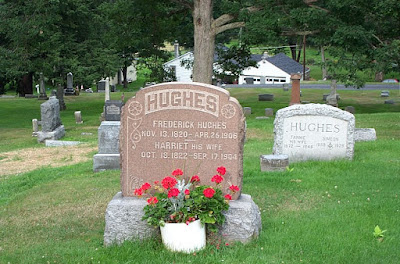 
This page  © 2015, Cynthia H. Smith
Send email to chsmith47@yahoo.com
This site may be linked, but not duplicated in any way without consent. The copyright on this page must appear on all copied and/or printed material.

GENEALOGY IS A WORK OF HEART
Your comments and suggestions are appreciated. It is with pleasure that I am able to present this information here for you to see. If you discover a relationship here, I would very much enjoy hearing from you.