X is for XXI - 21 children of Sarah Johnson McEwen

"There were 21 McEwens and they all went west, but ours."

That was my grandfather's reply when I asked him what he knew of the McEwen family history.    Since he was an only child, and his father and grandfather were also,  there  just weren't  any older  aunts, uncles or cousins to ask for an oral history.

My challenge was to determine where those 21 McEwens had gotten to!   In my ensuing research I discovered fellow McEwen descendents, Bruce McEwen  and Margory Gerold, who are also researching the McEwen family.  I learned that the McEwens of Northampton County,  Pennsylvania had  migrated westward to Seneca County,  Ohio in 1823.  My family and I  were excited to attend the 100th McEwen Reunion in Ohio  and  reconnect with long lost McEwen cousins.

And so the almost forgotten story of my great, great, great, great grandmother, Sarah Johnson McEwen slowly began to unfold.   She was the mother of 21 children!!!   WOW!  I only know the names of 16 of them.  Sarah's first daughter was Margaret and then came John, my 3x great grandfather.  Mary (also called Polly), Henry, William, Betsey,  Sarah,  Robert,  James, Elmira, George,  and Samuel were all born in the Mount Bethel  area of Northampton Co.,  Pennsylvania before the family pioneered to Ohio in 1823.   Permelia (Milly) McEwen (1823),  Rachel McEwen (1824),  Anna McEwen (1826),  and Martha McEwen were born in Ohio.  There were several other children whose names are unknown, but their existence is evidenced by  census records and other documents.

Grandmother Sarah Johnson McEwen was born on New Years Day in 1785, the daughter of John Johnson and Jerusha Kitchen.  Her family was part of the Scotch Irish settlement at Martins Creek known as the Hunter Settlement in Northampton County, Pennsylvania.  Birth records for the Presbyterians from this area for that time period have not been located even though  many have searched for them.  However Sarah is mentioned as the wife of William McEwen in her father's will and we are able to connect the generations through that document.

It is believed that Sarah and William McEwen  were married in Northampton County,  Pennsylvania about 1803.  William was the son of  John and Margaret Herin McEwen who were living in  Berwick, Briar Creek Township, Northumberland County (later Columbia County) when he was born November 8, 1775.   He  had come to Northampton County from Columbia County to learn the trade of blacksmithing when he met Sarah and they were married.

More than a dozen kids  and twenty years later, they pioneered west to Seneca County,  Ohio where they were one of the first families to open up this territory for settlement.  Sarah's son James was only about 5 when they moved to Seneca County,  Ohio.  Later he shared  his memories of that journey.  James said,  "We came here in the fall of 1823 and brought with us one half ton of hay, which we made at New Haven.  With this hay we kept four horses and two cows all winter.  There was plenty of picking in the woods all winter in 1823.  Father entered the southwest quarter of section twenty-seven, in Clinton, and put up a cabin there and a blacksmith shop.  My parents had twenty-one children altogether, of whom sixteen were then living." *

It is thought that they made that trip in Conestoga wagons.  Imagine that!!  All those children, pulling up stakes, traveling  less than twenty miles a day (we make the 500 mile trip from Northampton County, Pennsylvania to Columbus, Ohio  in about nine hours today) to take up house keeping in the wilderness!   And Sarah had at least four more children after arriving in Ohio.  She must have been a women of great strength and character.

At some point Sarah's oldest son John returned to Northampton Co., Pennsylvania to marry his sweetheart, Anna Houck.  My first post was about Anna and John and their family.  Oral history told to my grandfather, Homer McEwen by his parents and grandfather proved to be the link that connected the Pennsylvania branch with their cousins in Ohio. 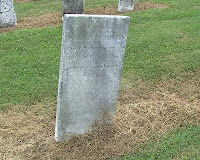 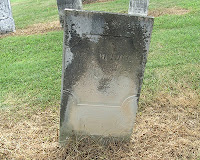 William and Sarah are buried in the  Rock Run Cemetery, Sect. 4, Eden Twp., Seneca Co., Ohio.  The cemetery is not far from the place where they lived.   You may wish to read more about the McEwen family on my webpage, William McEwen, Pioneer to Ohio.

*James'  story is taken from  History of Seneca County : from the close of the Revolutionary War to July, 1880 : embracing many personal sketches of pioneers, anecdotes, and faithful descriptions of events pertaining to the organization of the county and its progress   Springfield, Ohio: Transcript Print. Co., 1880, 717 pgs.