Elias Shull was a member of  various militia companies during the Revolution.   The DAR has a record for him as Ancestor #: A100951.  There is also a Sons of the American Revolution record, Membership:62393. He was a private in the company of  Capt. Shoop or Shupe, Nockamixon Twp., Bucks Co., Pa, in 1781 when he took part in the Battle of Trenton, NJ.  He also served as a private in the company of Capt. Manus Yost, of Haycock Township, Bucks Co., Pa. Militia,  1781.

It was known that he was  in service with the Bucks Co. militia at one of the lower points  on the Delaware, at the time of the taking of Trenton, by General  Washington, on Christmas night, 1776. However, there are no  existing muster rolls to show this service. 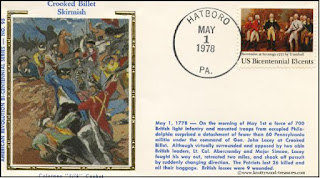 It is also well documented from accounts given by Elias  personally to persons who knew him that he was at the Battle of Crooked Billet on May 1, 1778,  a surprise attack staged by  a detachment of British Loyalists from Philadelphia, against several militia companies from Bucks and Cumberland Counties,  commanded by General John Lacey.  The Americans suffered heavy loses.

Elias owned farms at various times both in Tinicum and Buckingham Twps. in Bucks Co., Pa.  In 1800, after the Revolutionary War, he decided to sell his land and migrate to Ontario, Canada, where many families of his neighborhood had already located.  Having sold his lands, Elias loaded up and started the long journey,  but when he reached Easton he heard reports of serious Indian outbreaks.  This gave him pause for thought and upon  reconsideration  he abandoned the plan and instead  bought land in Lower Mt. Bethel.  Here he remained the rest of his life.  He engaged in  farming, opperated a tavern, and was the first carpenter and joiner in Lower Mt. Bethel.  It was said that during his life he made at least five hundred coffins.  At his death he was the largest land owner in Lower Mt. Bethel Twp.

Elias was born in L. Milford Twp., Bucks Co., Pennsylvania on February 3, 1755, and died in L. Mt. Bethel Twp., Northampton Co., Pennsylvania on May 3,1838.  His first wife was Catherine Kruger, daughter of Nicholas and Charity Kruger, Jr.  Catherine died following the birth of Peter on March 6, 1793. She was also the mother of Anna Catherine, born July18, 1781; Philip, born July 2, 1784; Elias, born November 27, 1786; and Maria Sarah, born October 9, 1789.  With a big family like that and an infant who needed tending to Elias  immediately married the widow of John Schuman, Charity Gertrant Kruger Schuman.   She who was the daughter of Nicholas Kruger, Sr.,  which meant that Elias married the half aunt of his first wife!   And he wasted no time producing a couple of more children.  Elias and Charity were the parents of Elizabeth, born April 23, 1794, and Mary, born June 18, 1796. The second Mrs Scholl, died on August 14, 1839 and is buried with Elias at Three Church Hill Cemetery in Lower Mt. Bethel.


His grave is marked with and American flag to pay homage to his service in the Revolutionary War. The family tree of Lillie Mae Deats Good, the great grandmother of Ron Smith, is ripe with veterans of the Revolutionary War.  She is the great, great granddaughter of  Elias Shull,  John Deats, James Ross,  Joseph Fox and the Third great granddaughter of Thomas Ross.  I wonder how often the family took time to remember the service of these men and the legacy that they left us.


GENEALOGY IS A WORK OF HEART
Your comments and suggestions are appreciated. It is with pleasure that I am able to present this information here for you to see. If you discover a relationship here, I would very much enjoy hearing from you.
Posted by Cynthia Smith on Monday, November 30, 2015