We can be happy that Peter's wife, Magdalena Susanna Grosher,  refused to travel  to Westmoreland County, Pennsylvania in 1774 with the rest of the Laufer's when Peter's father, Christian,  opted to relocate there and fight the Indian hostilities on the Western front.  Peter  first married Magdalena Susanna Grosher who was the mother of his children.  Later he married Magdalena Althause.

The following is taken from The Lauffer History (1905),  The Peter Laufer Branch.   "He lived in troublous times, for it is said that it was not safe to sleep in the house at night, for fear of the Indians.  The settlers had to go to the block house at Howersville.  When his father Christian, and all his brothers and sisters emigrated into Westmoreland Co., he alone remained in Northampton Co.  Tradition has it that he married a wife who refused to cross the Mountains."

He was a farmer and a  shoemaker by trade.  It is reported that he was a very short man and therefore too small to carry a musket, but he was one of the Pennsylvania German farmers who wanted  to  contribute  to the success of Liberty's cause.  So he joined Washington's army as a shoemaker  and practiced that skill during the length of his enlistment.   His name appears as a private of the 8th class, spelled Lawfart, in  the 3rd Battalion of the 7th Company under Captain  John Deeter of the Northampton County militia, under the command of Lieutenant Colonel  Nicholas Kern, in 1782, and  again on March 3, 1783.   He joined the company in 1780.

Peter Laufer, son of Christian "The Pioneer" Lauffer and Susanna Best, was born Oct. 18, 1752, and died July 21, 1830.   He is buried at Kreidersville Church, Allen township,  Northampton county where his grave is marked with  an American Flag by the Veteran's Administration to recognize his service in the Revolutionary War. 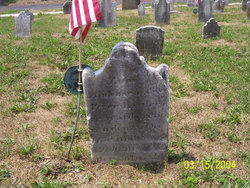 It is unknown when his first wife Magdalena Susanna Grosher  died or where she is buried.   A record of burial for his  second wife Magdalena Althause  is found in the Burial Record of Zion's Stone Church.  She was born May 15, 1767 and died  in 1831 and is also buried at Zion Stone Church in Kreidersville, Pennsylvania.


GENEALOGY IS A WORK OF HEART
Your comments and suggestions are appreciated. It is with pleasure that I am able to present this information here for you to see. If you discover a relationship here, I would very much enjoy hearing from you.
Posted by Cynthia Smith on Tuesday, February 19, 2013