Valentine Heffner joined the Revolutionary  Cause at the age of nineteen when he was drafted into the Continental Army in June, 1777.     According to his military records he continued to serve  in a state of readiness  as a minute man in the  militia of Franklin County,  Pennsylvania  until 1781.  He says he served under such noted Generals as Arnold, Armstrong, Smallwood and Washington. In the pension  application records  of 1837, he is named as  Vallintin Haffner.


The Revolutionary War Pension record of Valentine Heffner provides an account of his service.  In his  own words Valentine  describes his  terms of service in 1777, 1778 and 1779.  He was  at the Battle of Brandywine under the leadership of General George Washington.   This painting  "Nation Makers" by Howard Pyle at the  Brandywine Museum in Chadds Ford Pennsylvania depicts the battle. 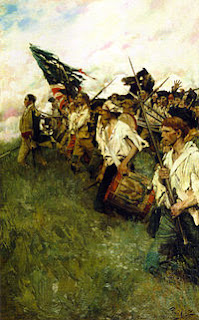 His service was provided in and around  the area north and west of Philadelphia. At the time of enlistment he  resided near Chambersburg in Franklin County, Pennsylvania.    Also in this record Valentine attests that he was born in 1758 in Germany and came to this country as  a child.  Other records  show he was born  in Teitzland, Pfalz of Zwiebrucken, (Hessia), Germany.


Much of  what I first learned of the Heffner family history  came from  a booklet written by my great grandmother,  Ella May Heffner Long.     The Heffner Reunion,  Huntingdon, PA, Aug. 30, 1924, "A Brief Genealogy of the Family of John, Son of Valentine Heffner", Mrs. H.H. Long, family historian.  In it she writes:
"The Heffner family is of German descent and runs back into the past beyond the scope of this article.   The direct lineal ancestry has been traced seven generations to Valentine and Barbara (Nancy )  Miller Heffner, natives of Franklin Co., PA.    Valentine Heffner and his brother, Jacob, had served in the Revolutionary War and become citizens of Walker Twp, Huntingdon Co., which land was purchased from the Indians in 1754.  Valentine Heffner,  after living a few years upon the farm near the upper mill,  the foundation of which remains, later known as the Robb farm, returned to Franklin County;  but in 1796 came to make permanent settlement in Walker Twp.  Valentine and Jacob each secured 96 acres of land in the Little Valley; Jacob occupying the lower farm and living there  until 1817 when he moved to Ohio.  The upper farm has always belonged to the Heffner famly and there Valentine died in 1848 at the age of 89 and was buried in the cemetery;  having for a number of years been a Revolutionary pensioner.  He was the father of  fourteen children."

It is unclear if  Barbara or Nancy or Mary  are the same person.  All are names given as the wife of Valentine Heffner in various documents.  It is recorded that he married Nancy/Barbara  Miller on April 30,  1783 in Washington County,  Maryland.  In 1855 his wife Mary applied for a widow's pension. 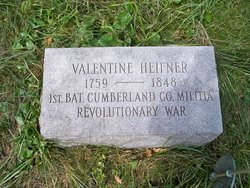 His grave in the McConnellstown Cemetery in  Huntingdon County, Pennsylvania is  marked  with a relatively new  stone commemorating his service in the War for Independence. No grave for his wife has been located.  Valentine was the great, great grandfather of my grandmother,  Sarah Eliza Long McEwen.

This page and all contents © 2012 Cynthia H. Smith
Email  to chsmith47@yahoo.com
Posted by Cynthia Smith on Thursday, February 07, 2013