Three Dreisbach Brothers: Johan Jost, John Adam and Simon and their sons fought  for the Independence of their adopted country, America!


The brothers  were born in Oberndorf; their christenings were recorded at the Evangelical Lutheran Church in Feudingen, Germany.   The family came to America on the ship Lydia and arrived in Philadelphia on September 20, 1743, after a  journey of 4 months.   They settled in Lehigh Township, Northampton County, Pennsylvania,  a few miles from Blue Mountain and the Lehigh Gap.  Before long,  father and sons acquired land in the region,  making a  living in the wilderness  and protecting themselves and their families from hostile Indian attacks. 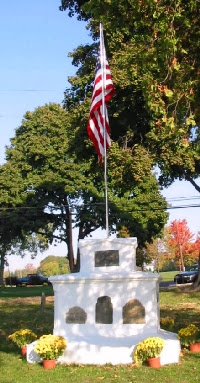 A memorial to the Dreisbach brothers has been erected at The Zion Stone Church Graveyard in Kreidersville, Pennsylvania.

1.  Johann Jost (Yost) Dreisbach was active in the American Revolution.  He is credited with multiple terms of service.  He  is shown as a member of the County Committee of Observation in 1774.  In  1775 he was a Captain in the Lehigh  Company of the Northampton County Militia.  He became a Colonel in the Third Battalion of Northampton Co. in 1776.  His service records  are recorded in the Pennsylvania Archives, 2nd Series, Volume 14.   Jost died October 17, 1794 and is buried at Zion Stone Church, Kreidersville, Allen Township, Northampton County, Pennsylvania.  Yost was married to Elizabeth and named nine children in his will.    His son John Adam Dreisbach, born October 15, 1762 in Northampton County, Pennsylvania  also provided service in the American Revolution, 1870-1782 and in 1783.  He  saw service as a  Private, 4th class  in 7th Company,  3rd Battalion under Capt. John Deter.   John Adam married Maria Margaret Hamscher, born in 1763 in Northampton County, a  daughter of  Johann Adam Hamsher and Maria Margretta Heckman.  Among their  descendents  is Beatrice Graver Smith  through her father, Wilson Graver's  side of the family.

2.   Johann Adam Dreisbach  married Susanna Coerber (Koeber).  "Adam Dreisbach, from Bucks County, Reformed, and Susanna Kirbirrin, Reformed, a single person from Lancaster County, were proclaimed publicly three different Sundays and on the Eighth Sunday after Trinity, July 16, 1749, married in the church after Kinderlehre with the following two couples [Peter Cronbach & Elisabetha Hagebuchin; and Georg Michael Schwabe & Catharina Gunthern]"  (2. Trinity) The DAR  recognizes his service record as having served as a Private under the leadership of  Captain  Alshouse as well as being in the Militia.   Johann Adam  died  on January 10, 1803 in Easton, Pennsylvania. Susanna died April 7, 1805.  They were buried in Easton at the site of the present day Easton Library.  Among their  descendents  is Beatrice Graver Smith through her mother,  Jennie Lauer's  side of the family.

3. Simon Dreisbach, Jr.  "was a farmer and miller in Lehigh township, and at the outbreak of the Revolution was a member of the Provincial Convention. He was a member of the Assembly from 1776 to 1780, and on Oct. 20, 1782, became a member of the Council of Censors. After the war he served several terms in the Assembly and was a member of the Constitutional Convention of 1790." (3. History)  He married Maria Dorothea Theis (Does, Toss, Taes)  and together they had 11 children.    Simon died  Dec. 17, 1806 and Maria Dorthea died July 8, 1773.   They are also buried  at Zion Stone Church, Kreidersville,Pennsylvania.  Our family has a line of descent through his son John Dreisbach, born August 21, 1752,  whom some references say  saw service in the American Revolution.   Simon and John  provide yet another  line of descent to Beatrice Graver Smith.