There is evidence that my Scots-Irish McEwen ancestor,  John,  was living in Northampton County, Pennsylvania  during the time of the Revolutionary War.  He was among the people who made up the Hunter Martin Settlement in Lower Mount Bethel.

His name appears on the January 1775 Tax List for Hunter Settlement in Mount Bethel Township as John McKoun.  On August 7, 1777,  John McQuown signs the Oaths of Allegiance, Northampton County.  And in 1785 we find land warrants under the name John McOwen for 80 and 200 acres in Northampton County.   The McEwen name is found spelled many different ways in the old records: McCowen, McCuen, McQuen, McQuan, McQuowin, McQuowen, McQuown and McEwen.   At that time, this area was populated with predominantly German speaking people. I am sure  the McEwen Scottish brogue was  very difficult to decipher  to the ear of the German men who recorded the name in all these different records. 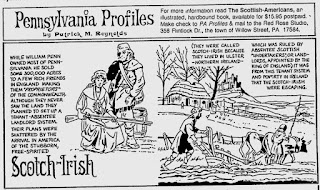 The following passage, taken from "The Scotch-Irish in America: Proceedings and Addresses of the Second Congress at Pittsburgh, Pennsylvania, May 29 to June 1, 1890"  sums up the character of these frontiersmen.  "The Scotch-Irish, as they were called, were emigrants from the northern part of the sister kingdom, descendants of the Scotch colonies planted there by Cromwell. They were a hardy, brave, hot headed race, excitable in temper, unrestrainable in passion, invincible in prejudice. Their hand open as impetuously to a friend, as it clenched against an enemy. They loathed the pope, as sincerely as they venerated Calvin and Knox. If often rude and, lawless it was the fault of their position.  Impatient of restraint, rebellious of any thing that in their eyes bore the resemblance of injustice, we find these men readiest among the ready on the battle fields of the Revolution. If they had faults, a lack of patriotism or of courage was not among them."

His record is also  recorded in the Pennsylvania Archives 5th series Vol. 8  p. 426 - 437.  There are no other men with a similar name in Northampton Co. at that time.

The 6th Battalion, Northampton County Militia was under the command of  Colonel Jacob Stroud at Fort Penn which was located on the site of present-day Stroudsburg, Pennsylvania.  The men  of the 6th Battalion played a pivotal role in General Sullivan's campaign  to destroy the  Indian settlements on the frontier.


John (McQuown) McEwen  was  born on  April 15, 1745.   He  married Margaret Herin,  a daughter of John Herin, who also  was a part of the Hunter Martin Settlement in Martin's Creek, Lower Mount Bethel, Pennsylvania.  Margaret was born November 29, 1755. They were married December 3, 1771. It is not known exactly were John and Margaret lived out their lives and where they are buried.  Evidence shows that they lived in both Northampton County and Columbia County.