Laufer family researchers call him The Pioneer and a Zealous Patriot. He was among the thousands of Germans who adopted  this land as their own and fought valiantly for her independence.  It is said that his descendents in the United States number in the tens of thousands.

Christian Laufer emigrated to this country in 1731.  He  traveled from his homeland in the Palatinate area of Germany  along the Rhine River in the accompaniment of his stepfather,  Barthel Gucker, mother Anna Catharina  and  brother  Lorentz.   The family arrived in Philadelphia on September 10 on board the  ship the Pennsylvania Merchant.  Christian was 8 years old.

Eventually the family settled in Moore Township of Northampton County, Pennsylvania, a  sparsely  settled  area that was still occupied by Native Americans.  Sometime in 1751, Christian married Susanna Best, the daughter of Wilhelm Best and his wife, Anna Susanna Schaeffer.   Life was difficult on this Pennsylvania frontier as they struggled to protect themselves from attacks during the French and Indian War  (1754–1763), a forerunner to the American Revolution. 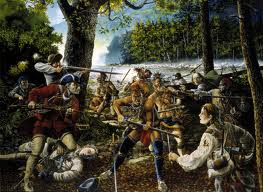 On October 5th, 1757, Christian, along  with almost all the heads of the households living in the region along the Blue Mountain  met at Peter Doll's Block House  and sent a petition to the Governor of Pennsylvania asking for arms and ammunition to protect themselves against hostile Indian attacks.

Showing  his ever increasing support  for the fight for the  independence of this country,  Christian became a naturalized citizen in 1765 in Lehigh township, Northampton County, Pennsylvania.  The  patriot spirit  was growing among he and his neighbors.

In 1774, Christian Laufer moved across the Allegheny Mountains to  the newly formed Westmoreland County, taking with him his whole family, with the exception of Peter, who remained in Northampton County.   Bellows, in his book, The Lauffer History said, "We can be proud of our hardy pioneer ancestors, who crossed the Alleghenies to hold the marauding Indians in check, to build homes and protect the western outposts in the troublous days of the American Revolution."  Christian Laufer  was  just such  a man.   He and fellow pioneers built homes and cleared land for  farms, producing  food staffs for themselves and the people living in  the outlying  fort towns. Their bravery helped stem the tide of  the Indian aggression.  With the endurance of German pioneers like  Christian and his  family the western outposts secured our claims to the Ohio and Mississippi.


The Daughter's of the American Revolution recognize him for having provided Patriotic Service  and cites that he “suffered depredation.”  A monument to his honor is placed in the Denmark Cemetery in Westmoreland County, Pennsylvania.  Christian was born in May of 1723  and died in 1796.  His wife Susanna was born in Germany in 1735. She died July 19, 1796 in Westmoreland County, Pennsylvania.  They were the parents of six sons and five daughters.  Christian was the 3rd great grand father of Estella Kunkle Smith.

More to come with the story of Peter Laufer, our  5th great grandfather.

For more about the Laufer family please visit  their website at http://www.lauffer.us/index.htm