Andreas Lilly was the eldest son of  John George Lilly and his wife Anna Margaretha.  Like his father, Andreas also gave service in the War for Independence.  He was born on November 16, 1748, more than likely in the area of Albany Twp., Berks, County, Pennsylvania.

He married Catherina Kunkel, a daughter of Johannes Kunkle and his wife Anna Magdalena Keiser.  Catherina was born May 1, 1751 in a place called Allemaengal, which literally means "all wants, or bad ground, the outback region", north of Kutztown, Pennsylvania.   The Lilly family and the Kunkle family eventually migrated north to land around Kriedersville, Northampton Co, Pennsylvania.  Land better suited for farming.

But this area was still the home territory for the Indian people.  Times were difficult for families in this area.  Indian raids were common  prior to the start of the Revolutionary War.  His name appears on the tax list for 1786  and shows that Andreas Lilly had 130 acres, 2 horses, and 2 cows.   In 1798, Andreas Lilly had a house built of stone, measuring  30 feet by 22 feet and containing two  windows.

During the Revolutionary War he served in the Northampton Militia in Captain Paul Knauss', 8th Company, 3rd Battalion under the command of Colonel Nicholas Kern. I noted with interest that on  September the 6th 1780,    Adris Lilly served in the same class with Felty Onawalt.   These two patriots are both ancestors of Ron Smith, my husband.  The Burial Card shows evidence of several enlistments for which he is given credit. 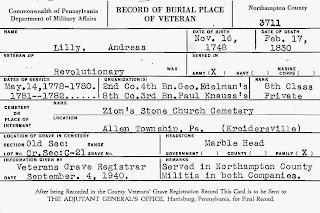 Andrew Lilly made out his Last Will and Testament  in 1830.  File No. 4112, Allen Township, Northampton Co., Pennsylvania.   He died February 17, 1830.  He is buried in the Zion UCC Stone Church Cemetery, Kreidersville,  Northampton County, Pennsylvania where his name is included on the DAR memorial.  Find A Grave Memorial# 5718531. Catherina preceded him in death on July 10, 1814.  The original headstones for either of them have not been located but they are both listed in the records of the cemetery.