J is for Jennie

Hummm....  so what was your real name, and by the way,  what really was your birth date?  Ronnie's great grandma  has really been an enigma  and maybe one of the most challenging  ancestors to research.

Jennie's  family was from Hazard, Pennsylvania, a community of hard working families, where most of the men were metallic ore miners like Jennie's father.   Beatrice Graver Smith said her mother was  Jennie Lauer, daughter of  William Lauer and Amanda Anewalt.  Part of the problem of finding records  for Jennie was the spelling of  her father's last name, Lauer or Lower,  or various variations.   But then there was also the problem of  her given name.  Was it Ellen or Jennie or  Genevieve? 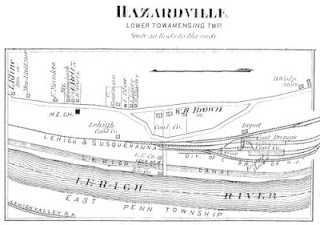 Her marriage license to Wilson Graver  says her name was  Ellen J. Lawer  or Lauer.  Both spellings appear on this document.  This  shows her birth date as June 19, 1882. 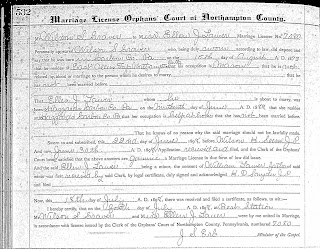 The first census record in which she is ever listed is the 1900 census. Here she is listed as Ellen J. Graver, the 17 year old wife of Wilson Graver. She never showed up on a census with her birth family.  She wasn't born yet  for the 1880 census and the 1890 census records were all destroyed in a fire.

And at some point in time Wilson left.  Why?  I have not been able to locate a 1910 census record for members  of  the Wilson Graver family except for  daughter Beatrice who was living with her uncle,  J.  David  Graver and his wife Annie in  East Allen Twp.,  Northampton Co.   Beatrice says that her  father left the family  in 1912 and moved to Ohio to live.  However,  since Thomas was  born in  1911, (conceived November, 1910)  maybe they were separated for a time and then got back together.  By 1918 however,  Wilson was in Ohio as evidenced by his draft registration in Lorain, Ohio.  Jennie had to find a way to provide for  her children and Beatrice said they were scattered, living with different family members.

Sometime around 1923 Jennie relocated to Fort Wayne, Indiana and started calling herself  Genevieve.  She married Whitney Moore  on  April 16, 1927 in Fort Wayne, Indiana. The marriage license  gives her name and birth date as Genieve E. Lauer,  born June 19, 1884.   Jennie was 43 years old.  Or maybe she was she was 45 since she shaved 2 years off her  previously recorded birth year of 1882. She was 5 years older than Whitney, or maybe that was 7 years.  Oh, Jennie, I wish I could have known you!

This is a transcription of the obituary of  Jennie Ellen (Genevieve) Lauer Graver Moore  which appeared in  the Fort Wayne Journal Gazette  on Sunday, Dec. 4, 1932.

Interestingly, daughters Ida and Naomi and her older sister, Amanda Lillie, were also living in Fort Wayne.  There was love in this family!  Jennie had difficulties  holding her family together, but neither she nor Wilson lost touch with them over the years. 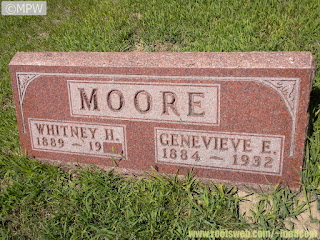 She is buried in the  Independent Order of Odd Fellows Cemetery,  Adams Township, Allen County, Indiana.  Rest In Peace Grandmother.