By 1775, at least 100,000 Germans had entered the colonies, making up a third of the population of Pennsylvania. (Germans in the American Revolutionary War, Robert Wilde)  Like many of his neighbors, Joseph Fox (Fuchs) was of German descent. The Land Patent map pictured below shows a number of adjoining properties.  Joseph  Fox and another ancestor, Valentine Miller, were neighbors.   Their  farms were in the area that is now Washington Township on the border of Lower Mount Bethel Township, Northampton County, Pennsylvania.  Now, that was an interesting  discovery. 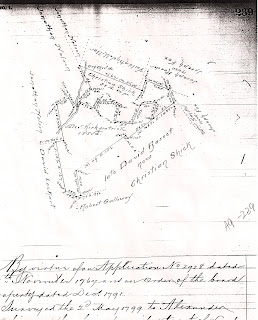 Joseph, born June 12, 1761,  was the son of  Johann Christophel Fuchs and Rosina Elisabetha Link.  His father  immigrated to America at the age of 27,   arriving September 27, 1740 on the ship Lydia from Germany.  Johann Christophel Fuchs  is recognized through the DAR as  having provided Patriotic Service.  He may have been too old to fight, having died May 1, 1780,  during the time period of the Revolutionary War.  But he,  like so many of  American German population in Northampton County  was a true patriot and supporter of the American pursuit for Independence.


The Pennsylvania Archives 5th Series  reports that Joseph enlisted as a private in the 5th Battalion, Mount Bethel Company, Northampton County, Militia, Private 7th class., May 1, 1782.   He served under the command of Captain John Long.  Nothing more is known about his service record.  The usual tour of duty is reported to have been 6 months.

He was married to Christina Reimel, daughter of George Reimel and his wife  Anna Elizabeth Barbara.  Christina was born in 1762.   Joseph and Christina were married on the 6th of November, 1781.


The records of the births and baptisms  of most of their children appear in the Church Records of the Evangelical Lutheran and Reformed Congregation of Mount Bethel Township, Northampton Co., Pa. 1914.  Services at this church were conducted in German until 1840.  These records are the first transcription from the old German Record. The transcription  was done by the Rev. Dr. Wm. Wackernagel, Professor in Muhlenburg College for the Rev. W.E. Werner, pastor of the Christ Lutheran Church in Upper Mount Bethel.


Joseph is buried  in the Old Union Cemetery  in Upper Mount Bethel Township, Northampton County, Pennsylvania.  His grave is honored with an American flag.  He died May 22, 1821. 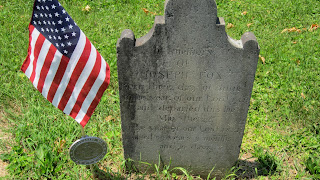 The location of Christina's  grave is unknown.  Her name does not appear in the list of burials  transcribed  in the early 1900's for  the Old Union Cemetery, but it seems likely that she is also buried here.   She died in 1832.


Joseph Fox and Christina Reimel  were the 6th great grand parents of my husband Ronald.   Their daughter Susanna married  Joseph Ross who had a daughter named Caroline.  Caroline married  married Philip Deats  and had a son named Joseph whose daughter Lillie May married George Good.   Their son Earl married Edna May Frey.