When I asked my grandfather, Wm. Homer McEwen of Lower Mount Bethel, Northampton Co., Pennsylvania  what he knew about the McEwen family history he said, "There were 21 McEwens and they all went west but ours."  So my task back in 1976 was to figure out where all those McEwens had gone. I knew Pappy's father was Henry McEwen and that his father was Billy McEwen and that Billy's father was a man named John McQuown.  It was unknown who John's parents were, they must have been the ones who "went west".

After a whole lot of research I hit pay dirt!  A letter in answer to an inquiry I had placed in the Tri-State Trader, a weekly antiques newspaper published in Indiana arrived  with the connection I was looking for.  Marjory Gerold wrote that she suspected that my John was the son of William and Sarah McEwen who had migrated to Seneca County, Ohio in 1823. Her family history refered to him as "John, the Pennsylvanian."

James McEwen, younger brother of our John, came with his parents, William McEwen and Sarah Johnson McEwen, to Seneca Co., Ohio in 1823, and settled upon the land now occupied as Greenlawn Cemetery was quoted in the History of Seneca Co. about the family's journey from Northampton County, Pennsylvania to Ohio: 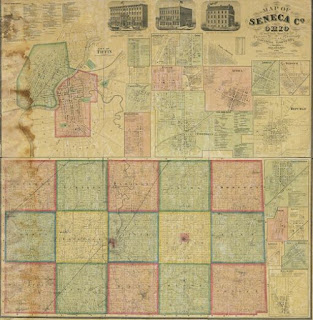 "My father, William McEwen, was born in Berwick, Pennsylvania.  He went to Northampton county, Pennsylvania, to learn the trade of a blacksmith, and was married there to Sarah Johnson.  We came here in the fall of 1823 and brought with us one half ton of hay, which we made at New Haven.  With this hay we kept four horses and two cows all winter.  There was plenty of picking in the woods all winter in 1823.  Father entered the southwest quarter of section twenty-seven, in Clinton, and put up a cabin there and a blacksmith shop.  My parents had twenty-one children altogether, of whom sixteen were then living.  I am the youngest of the family. (History of Seneca Co.: 1880)"


McEwen is a Scots-Irish name.  The McEwen family came to the United States prior to the Revolutionary War. John McQuown was living in Northampton Co., PA in the township of Lower Mt. Bethel at the time of the Revolutionary War.  The family, like so many other Scots -Irish, were people who lived on the outer edge of the settled areas of the time. They relocated many times between Northampton, Co. and Columbia, Co., Pennsylvania. John's son, William McEwen, the pioneer to Ohio, was born at Berwick, Columbia, Co., Pennsylvania on Nov. 8, 1775.

When a young man William came to  Northampton Co.,Pennsylvania to learn the trade of blacksmith, which became his life's work. He married Sarah Johnson, daughter of John Johnson,  and together they had a family of 21 children. William and Sarah bought and sold property in both Berwick, Columbia, Co., Pennsylvania and Mt. Bethel, Northampton, Co., Pennsylvania. In 1823 when William and Sarah McEwen pioneered west to Seneca Co., Ohio they were one of the first families to open up that territory for settlement. Their son John returned to Mt. Bethel to marry his sweetheart, Anna Houck. John's descendents continue to live in Northampton Co. Pennsylvania.

A very good book has been published by Marjory McEwen Gerold, "The Descendents of Thomas Clark and Maria Disinger McEwen" which traces the McEwens in Ohio. It was through her research and mine that the connection of our John in Northampton Co., Pennsylvania to his father William in Seneca Co., Ohio was made.

William McEwen, with his large family homesteaded the southwest quarter of section twenty-seven, in Clinton township, Seneca Co. There he built a cabin for the family and a blacksmith shop where he carried out his trade. William & Sarah Johnson McEwen are buried at Rock Run Cemetery, Sect.4, Eden Twp., Seneca Co., Ohio. The Cemetery is not far from the place where they lived.

Sources:
Please see list of all My Revolutionary War Ancestors.

Please see  the Index to my  "Who's Your Grammie"  Blog

This site may be linked, but not duplicated in any way without consent. The copyright on this page must appear on all copied and/or printed material.
Posted by Cynthia Smith on Tuesday, January 29, 2019