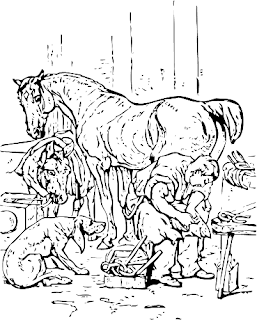 John Johnson  practiced the trade of Blacksmith and most likely William McEwen was apprenticed to him to learn the trade as well.  A blacksmith forged  items needed by farmers such as  shovels, plows  and pitchforks. They made  the shoes for horses and the metal parts needed to make carriages and wagons. He also manufactured  all manner of metal items  such as nails, pots and pans, door latches and hinges. Every village had a blacksmith who was essential to the economy of the community.


The Johnsons and McEwens were members of the Scotch-Irish Settlement at Martins Creek.  Also known as Hunter's Settlement, this location is right across the Delaware River from Warren Co., NJ where John must have lived as a boy.  John Johnson was the son of  William Johnson and Elizabeth who lived in Sussex Co., NJ in the neighborhood of Knowlton Township which today is in Warren County, New Jersey.    William Johnson's will #600S June 20, 1794, and was probated October 11, 1794 in Sussex Co., NJ. and names his children, who were: Abraham, John, Anthony, Catherine, Margaret, Sarah and Elizabeth; and his son- in- law, Moses Weaver.

John Johnson's  marriage to Jerusha Kitchen took place after the Revolutionary War  in about 1784.

Several documents show his service as a patriot in the Revolutionary war.

His tombstone is still in very good condition in the Scotch-Irish Presbyterian Burial Ground.   The stones are black and are located near the wall by the Good Shepherd Lutheran Church.  He died at  the age of 54 in 1815.


John and Jerusha Kitchen Johnson were the parents of several children.  From the abstract of his last Will and Testament  #3044, the children named are:  Sarah who married  William  McGowen (McQuown, McEwen);  Elizabeth, who  married Thomas Searles and Margaret, who married to Ignatius Fradeneck.  Others  compiled and listed by  Marjory Gerold  are Henry, Peter, William, Martha, John and Isabella.  From his will the marriage of Sarah Johnson  to William McEwen  is proven.   He left her a large part of his estate.  In 1823 after the death of her mother, Jerusha,  Sarah and William McEwen pioneered to Seneca Co. Ohio where William practiced the trade of blacksmith. just as his father in law had taught him.

Please see  the Index to my  "Who's Your Grammie"  Blog

This site may be linked, but not duplicated in any way without consent. The copyright on this page must appear on all copied and/or printed material.
Posted by Cynthia Smith on Saturday, December 29, 2018