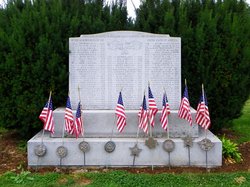 That is all to be seen marking the gravesite of our ancestor Jacob Bonstein on the Armed Forces Memorial stone at Dryland Reformed Cemetery, Hecktown, Northampton County, Pennsylvania, USA. But there is certainly more to his story than a few figures etched in stone.


To begin with, this ancestor of ours arrived in America as a member of the Regiment von Knyphausen.  He was a Hessian Soldier hired by the English to fight against the American patriots. He arrived at Staten Island in New York on August 15, 1776 and took part in the Battle of Long Island.


Remember learning about Washington crossing the Delaware when you were in school?  In the infamous Battle of Trenton, Jacob Bunstein was captured along with upwards to 1,000 other of his fellow Hessian troops in the early morning of December 26, 1776. The prisoners were paraded through the streets of Philadelphia, after which Jacob was marched off to Lancaster and later given a "work release" of sorts.  Like many other Hessian soldiers he was allowed to work off the cost of his prison confinement on a local farm.

Johann Jacob Bonstein and his brother Paulus Bonstein were  born in Grossropperhausen, Germany where they were trained to be soldiers from an early age.  During the American Revolution they both became prisoners of war, serving confinements in various locations. After the war,  Johann Jacob Bonstein stayed in America and Paulus returned to Germany.

According to records at the Pennsylvania Archives our Hessian soldier later fought on the American side in the War of 1812, which is hard to believe as he would have been an old man.  But, Pennsylvania Veterans Burial Cards, 1777-1999, Record of Burial Place of Veteran, Northampton County shows this information:  Jacob Bonstein, born 12 Feb 1755, died 12 Apr 1840. A Veteran of War of 1812 - 1814 serving in the Army from  July to  December of 1814 in Capt. Dornblaser's Co., 2nd Brigade, 2nd Division. Buried in the  Dryland Union Cemetery, Hecktown (Lower Nazerath Township), PA.  Section: Middle, Cr. Sec. E-29.


Please see  the Index to my  "Who's Your Grammie"  Blog

This site may be linked, but not duplicated in any way without consent. The copyright on this page must appear on all copied and/or printed material.
Posted by Cynthia Smith on Thursday, November 29, 2018