At the age of  20  John Peter Long entered into the militia to fight in the war for  Independence.  He enrolled as an Associator in the Bucks County Militia on August 10, 1775.  He took the Oath of Allegiance before John Davis, Esq. and saw several months of service in the Ninth Pennsylvania Continental Line under Captain John Davis.

Reference is found that he also served in Captain Nicholas Patterson’s company, Tinicum Township, May 22, 1780. As a single man he was available to serve when the call for action was given. His duties would have primarily involved securing the home front from invasion by hostiles.

Some existing tax records are helpful to establish that Peter owned property in Bucks County.  The Tinicum Twp. Tax Lists for 1779 shows that Peter Long is taxed as "young man" before his marriage in 1780.  In 1781 the record shows that  Peter Long owned 2 horses and 2 cattle.  Again in 1782 the record shows that Peter still had those two horses and 2 head of cattle.  The 1787 record shows that he was  taxed 10 shillings.   Shull comments, "About 1800  he located in Durham twp., Bucks Co., PA, along the Durham Road, near Rufe's Schoolhouse, on the farm later occupied by Richard Kintner.  They were members of St. Luke's Lutheran Church.  Peter served as Elder and was on the committee to erect the Nockamixon Union church in 1812.  He was a man of Excellent character,  noted for his honesty and good sense.  He possessed a good common school education and conversed both in German and in English.  He was held in high esteem by all who knew him."

John Peter and Elizabeth Long were members of St. Luke's Lutheran Church, Nockamixon during the pastorate of Rev. John Conrad Yeager.  In 1978,   I located the graves of  Peter and Elizabeth Long in the Nockamixon Cemetery, Bucks Co., PA.  Their birth and death dates are recorded on the stone.  He lived to be 72 years old. Elizabeth was born November 15, 1762 and died July 18, 1828.  She lived to the age of 65. 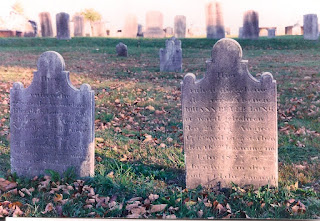