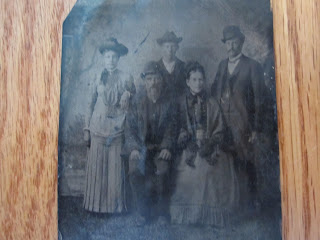 This very awesome tintype is a picture of several members of the Edward Graver family who lived in Franklin township, Carbon County, Pennsylvania.  Ed and his wife Elizabeth are seated.  Wilson Graver, the father of Beatrice Graver Smith, stands in the middle back flanked by his sister and brother.   Wilson married Jennie Lauer. You must go back and read the story of their very rocky relationship, but before you do, I will share with you what I have learned about Wilson's great, great grandfather, George Graver.

George (Graber ) Graver is the earliest known ancestor of Beatrice Graver Smith. Beatrice was my husband Ron's grandmother.   In her written family history, she wrote that oral family history told to her was that this branch of the family was from Switzerland. They were probably members of the Palatine people who immigrated to America from the Rhine river area of Germany / Switzerland.  George married Maria Catherine Ludwig.

The Pennsylvania, Land Warrants and Applications, 1733-1952  shows that George Graber had a  Warrant dated 20 August 1768 for 50 acres in Northampton County, Pennsylvania. That is a substantial tract of land. Between then and 1807 when he died he acquired more land as evidenced in his will.  His will was filed and proven on February 26, 1807 in Moore Township, Northampton County Pennsylvania. File #2506, Will Book 4 names sons John and Mathias as executors and  also names his eleven children. To son Henry his homestead of 66.5 acres, while son David received 50 pounds. To his daughter Elizabeth (Moser) was given the yearly interest on 100 pounds,  the principle to be retained for her. To his sons George, Mathias, Peter, Andrew, Henry and Daniel each received 30 pounds.  John and Mathias, the executors, received 25 pounds.

As to the records documenting Revolutionary War service for George Graver the following evidence has been found. 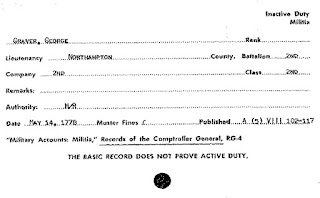 The Archives Records Informational System says that "Inactive Duty" meant the soldier did not necessarily see active duty.  The Pennsylvania Militia was organized under an Act of the Assembly of March 17, 1777 that required compulsory enrollment of all able-bodied white males between the ages of 18 and 53. 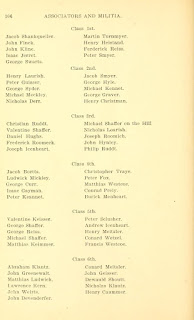 But his name appears in a general muster roll of the 2nd Battalion of the Northampton County Pennsylvania Militia, May 14, 1778.  The troops were commanded by  Colonel George Breinig, Lieut. Colonel Stephen Balliet, and 2nd Company Captain George Knappenberger.  George Graver was in the 2nd class.
The Daughters of the American Revolution  provides us with a record of his service in the Revolutionary War.  He is Ancestor #: A133784.  The DAR record gives him credit in the 1st Battalion of the Northampton County Pennsylvania Militia in the 2nd Company under Lieut. Colonel Stephen Balliet, Major Frederick Limbach and Captain Grienlmyer.  Dates of service for this enlistment were November, 1781 to January 1st 1782.  He is listed as a private.
Therefore we can surmise that he willingly availed himself for service for the duration of the War for Independence.  Living in  this part of Northampton County meant not only being prepared to go into battle if called upon, but also meant securing the safety of the home-front from invasion by hostiles, as this area was very much the frontier at that time.
Life was not easy for a family living on the frontier.  George's son Daniel married Elizabeth Dreisbach, whose father Johannes Dreisbach also gave service in the Revolutionary War.  Dan and Elizabeth Graver had a son named John Andrew who married Elizabeth Hower and had a son named Edward who is  pictured in the above photo.  Their son Wilson Graver married Jennie Lauer and were the parent's of Beatrice Graver Smith, Ron's grandmother.

This entry marks the 3rd year anniversary of the publication of my Family History Blog, "Who's Your Grammie".  Your comments are welcome on the form below.  Please see this list of all My Revolutionary War Ancestors.


This page  © 2015, Cynthia H. Smith
Send email to chsmith47@yahoo.com
This site may be linked, but not duplicated in any way without consent. The copyright on this page must appear on all copied and/or printed material.
Posted by Cynthia Smith on Monday, August 03, 2015