I found the following excerpt online. It was taken from a paper read by W. J. Heller, President of the Northampton County Historical Society, at a meeting of the Historical Society of Bucks County. Date unknown.  “The Book Shelf Scrap Book of Easton and Northampton County,” Vol. 1, pages 64ff, located in the Marx Local History Room, Easton Public Library, Easton, Pennsylvania.
"Johan Peter Seiler was a graduate of Heidleberg and possessed marvelous magnetic influence. His wonderful curative powers soon brought him prominently before the community. The more superstitious attributed his almost miraculous cures to witchcraft. This accusation caused his emigration to America, where he landed in 1743 and settled near Johan Wilhelm Philips at what is now Philipsburg, New Jersey. Being unable to procure certain herbs and roots any nearer than on the property of Peter Raub, Saylor concluded to move to the Pennsylvania side of the river, where he soon became famous in western New Jersey. This remarkable healer cured every ailment that came before his notice, making no charge but accepting voluntary gifts, money, potatoes, grain and any produce. The Indians gave him, in return for his services, skins of rare animals which he sold in the Philadelphia markets at fancy prices. The Indians held him in great veneration and called him “the great pow-wow,” the greatest title of honor they could bestow. The title was taken up by the white settlers and he became known from Massachusetts to the Carolinas as the great pow-wow doctor of Pennsylvania."

About 1745, Peter Seiler married Anna Margartha Maurer. Anna Margartha was born in Germany and came here  when she was about the age of nine with her parents, Jacob and Margaret Maurer.  They arrived in Philadelphia May 29,1735 aboard the ship "Mercury", captained by William Wilson.

During the Revolutionary War,  Dr. Peter Seiler (Sayler) was the Lieutenant Colonel in the First Battalion of Northampton County Militia, under the command of Colonel George Hubner when the Battalion was  formed in June 1777.

The Daughters of the American Revolution also has  a Record of Service for him.

We can be thankful that a will written back in 1803 often contained plenty of genealogical information.  The children of Peter and Anna Margartha are named in his will.  They had been the parents of 10 children,  nine of whom are mentioned in the will.  They were Anna Maria, Frederick born in 1748, Elizabeth  born in1750, Anna Maria born in 1752, Johannes Daniel born in1753, Susanna born in1760, Veronica, Catharine, Jacob born in1767 and Peter born in 1770. 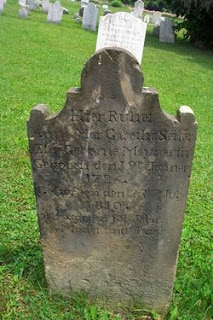 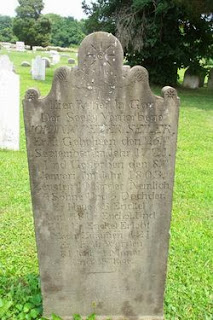 The inscription, written in German, on his tombstone in Raubsville Cemetery, Raubsville, Williams Township, Northampton County, Pennsylvania says he was the father of 4 sons, 6 daughters, 63 grandchildren, 48 great grandchildren and  two great, great grandchildren.  He was born September 26, 1721 and died January 8, 1803 having lived a good life of 81 years, 4 months and  15 days.   From her tombstone we learn the maiden name of Anna Margaretha.  In German it says   "Geborne Maurerin" which tells us that she was a daughter of a man named Maurer.  She was born January 19, 1726  and died July 23, 1810, having lived 84 years,  6months and  4 days.

So here is the way we fit into this family line.  Remember Camela Engler Smith? Camela's mother was Dorothea Kocher, whose parents were Peter Kocher and his wife Elizabeth Seiler.  We are getting there.  Elizabeth Seiler Kocher, born August 13, 1779 to Frederick (born in 1748) and Dorothea Seiler,  was a granddaughter of Dr. Peter Seiler.   And that makes Dr. Peter Seiler the 6th great grandfather of my husband Ron.

I welcome your comments. Please consider joining this BLOG as a follower or member.
Copyright
This page  © 2013, Cynthia H. Smith
Send email to chsmith47@yahoo.com
Posted by Cynthia Smith on Tuesday, December 03, 2013