Here is another story of the valor of our Revolutionary War ancestors from Upper Mount Bethel Township in Northampton County, Pennsylvania.  These German speaking men were first and second generation Americans ready to fight for the cause of freedom in their newly adopted homeland.  Peter Hilgert was born on December 7, 1754, three years after his father  Johann Franz Hilgert arrived from Germany.  Over time the name came to be spelled Hilliard.

Peter served as a private in the Revolutionary War as a Waggoneer.  More than likely he was driving a Conestoga wagon as described here.

"The Conestoga wagon and its antecedents saw widespread use in Pennsylvania as early as 1730, and many of the wagons supplied to General Braddock's ill-fated 1755 expedition were of that type. In 1789 Dr. Benjamin Rush described the Conestoga as a 'large strong wagon, covered with linen cloth ... In this wagon, drawn by four or five horses ... [farmers] convey to market over the roughest roads, two or three thousand pounds weight of ... produce. In the months of September and October it is not uncommon to meet in one day from fifty to an hundred of these wagons on their way to Philadelphia, most of which belong to German farmers.'   Similar sights must also have been common during the war."  Copyright © 1999 John U. Rees. All rights reserved http://www.continentalline.org/articles/9902/990202.htm. 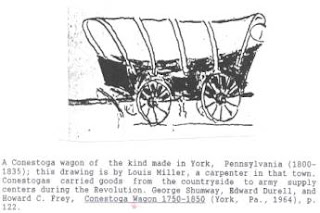 Peter applied for a pension in 1832. In his affidavit  he states that  he enlisted and served several terms of duty in the Pennsylvania Troops.  First for nearly 3 months beginning April 1, 1776 in Captain John Mack's Company under Colonel Jacob Stroud.   From December 1777 for 3 months in Captain Patrick Campbell's Company under Colonel Nicholas Kern.  Later he served again for 3 months under  Captain Patrick Campbell and  Colonel Jacob Stroud from October  1778 or 1779.

In testimony on the pension application for Elizabeth to receive compensation based on her husband's service, George, brother of Peter Hilliard, stated that he remembered his brother telling stories that he drove a wagon to haul the wounded and dead from the field of battle after the battle was over.  George believed that this had been the Battle of Brandywine.

Sometime during the conflict, around the year 1779,  Peter married Elizabeth Emrich, a daughter of Jacob Emrich and his wife Ann Elizabeth (The verdict is still out as to whether she was a Beck or a Buss) Emrich.  The Pension affidavit says Peter Hilgert and Elizabeth Emrich were married at her father's house  in Mount Bethel Township by Mr. Fredrick, a preacher.  In 1850, Margaret Emrich Hilgert, wife of George Hilgert, Peter's brother stated that she was the sister of Elizabeth Hilgert.

After the war, Peter was a member of the Pennsylvania legislature. He was allowed pension on his application executed August 31, 1832, while a resident of Upper Mount Bethel Township, Northampton County, Pennsylvania.

He is  buried in the Old Union Cemetery in Stone Church, Centerville, Pennsylvania where his grave is marked each year with an American Flag to honor his service.  I recently (2/21/2016) learned that Elizabeth is buried in the Milton Cemetery in Northumberland County, Pa.   The stone says she  died September 24, 1840 at the age of 80 years, 3 months and 13 days. This calculates to a birth date of Jun. 11, 1760. 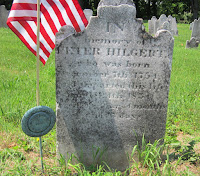 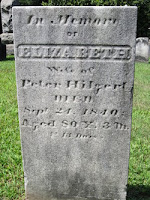 Peter and Elizabeth's daughter Christine married  Jacob Eilenberger.  They  had a daughter Catherine who married John Correll.  Their daughter Josephine Correll married Henry Good and had a son named George  who was the grandfather of Dorothy Alice Good Smith.


Notes:
Please see this list of all My Revolutionary War Ancestors.