When the  Revolutionary War began, 25 year old  William Enyeart  was called to duty  and was commissioned Ensign on December 10, 1777, in the fourth Company, third Battalion of the  Bedford County Militia.  Within months  he was commissioned a Second Lieutenant on May 23, 1778,  telling us that he was a respected and capable young man to hold the rank of a commissioned officer in the Militia.  From 1778  through 1783 William  was a part of the  Rangers of the Frontier.  It was the duty of the Rangers to scout the forests and guard the settlements against surprise attacks  from  hostile Indians who were incited by the British to reign fear and havoc on the remote frontier settlers.  The Pennsylvania  Archive, 5TH Series, Volume  5, pages  71, 73, 74, 77 record his service.

It is thought that William Enyeart was born in Middlesex County,  New Jersey in 1752. Around 1770 he moved from New Jersey to Pennsylvania where he first settled in the Trough Creek Valley of Bedford County. A short time later he moved to the valley of the Raystown Branch of Juaniata River. Here he acquired land in the upper part of Hopewell Township and partially in what is now Penn Township and began his improvements.

In 1772 William Enyeart married Catherine Shell in nearby Frederick County,  Maryland. William and Catherine (Shell) Enyeart became the parents of five children, who were, John, Mary, William, Elizabeth and David. Catherine died in childbirth on March 20,  1788 at the age of 38 years while giving birth to  twin girls who  died the same day. Catherine was buried in the Yocum Cemetery on the Raystown Branch, but was later reinterred in the Reformed Cemetery at Marklesburg, Huntingdon County, Pennsylvania with William.

Life was difficult for families living in this area.   J. Simpson Africa in  his book  The History of Huntingdon and Blair Counties,  Pennsylvania  wrote  that William Enyeart  "during the revolution sought protection in the fort at Standing Stone, and when no Indians were suppose to be about tilled his farm in company with a neighbor by the name of Reed, who improved an adjoining tract of land, one standing guard while the other worked. They several times escaped barely with their lives, as one occasion Enyeart jumping down the bank of the river and running to the fort near Marklesburg, thus avoiding the savages, who waited to waylay him should he try to return to Huntingdon."

In  1777 William Enyeart  started to build a home.  He positioned the house  on the side of the mountain on the Raystown Branch of the Little Juniata River just  south of Huntingdon in Hopewell Township. Construction  slowed  during the Revolutionary War. By  1782 the war effort was ending and William Enyeart got back to work on his very impressive, large stone house overlooking the Juniata Valley.  When finished it contained 10 rooms and was two and one half stories high.  William,  a part time blacksmith by trade, had made all the nails, spikes and other hardware used in the construction.  The house was so well constructed that the walls were still standing after  200 years. Tax assessment* in Bedford county, Hopewell Township for the year 1788  show William Enyeart with 170 acres, one horse and three cattle. Huntingdon County  was formed in 1787 out of the north portion of Bedford County and included William Enyeart's farm. Records show that William was warranted 100 acres of land in Hopewell Twp Huntingdon Co on March 7 1789.  Unfortunately the entire area around the old homestead was completely cleared to make way for the Raystown Dam.

After Catherine died  leaving him with five children, William  married for a second time. On September 5, 1788 he married  a much younger Jane Norris.  She was born August 19,  1774 in Sharpsburg,  Prince Georges County, Maryland which is now Washington County,  Maryland.  She was a daughter of Joseph Norris and Mary Moody.   William and Jane (Norris) Enyeart were the parents of sixteen children: James, Joseph, Silas, Thomas, Catherine, Benjamin, Jane, Rachel, Levi, Nancy Ann, Martha, Sarah, Rebecca, Margaret, Abraham and Eleanor.  Imagine that!   Jane was the mother of 16 children and mothered her five older step children as well.  All in all, William was the father of a total of  21 children who survived childhood.

William and Catherine are buried in the Reformed Cemetery at Marklesburg, Huntingdon County, Pennsylvania.  William died at the age of 76 on September 2, 1828. 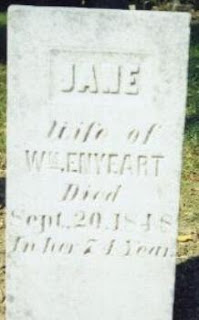 Jane (Norris) Enyeart, survived William  by twenty years. She subsequently moved to Indiana with a number of her children who pioneered there.  Jane died on September 20, 1848 at the age of 74 years. She is buried in the Lagro Cemetery in Wabash County, Indiana where seven of her children are also buried.

William and Jane were  the parents of  Rachel who was born in Hunterdon Co. on July 12, 1800.  Rachel married  John Heffner and had a son named Benjamin.  Benjamin married Ann Eliza States and  was  the father of my great grandmother Ella Mae Heffner.  If anyone reading this story has knowledge of Jane Norris Enyeart  I would love to hear from you to share information.