By December of 1782 the Revolutionary War was  nearly over.  The newly formed government of the United States of America had entered peace talks with Britain and American troops were happy to be home to celebrate Christmas with their families.


But it was a sad time for the family of Paul Brodt as he had lost his life in a boating accident on the Delaware River sometime in December.  Paul and his wife Maria Barbara Miller had ten children by 1782, the youngest of them, Susanna, my 3x great grandmother,  was born in April of that year.  But let us back track a little.


Paul came to this country from Germany when he was 16 years old.  I've covered his early history on  my webpage at Paulus (Brod) Brodt.  By the time the Revolutionary War broke out he was a well established businessman operating tanneries along the Delaware.  A tannery was a place where animal skins were processed to produce leather.  Leather was a much used material for the making of  such things as saddles, harnesses, shoes and trunks.  It was a pretty stinky business and I imagine it may have looked something like this. 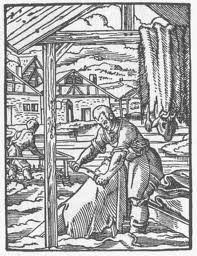 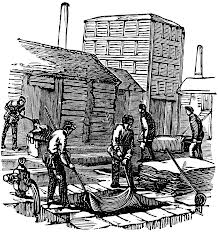 His tanneries were in Portland, Upper Mount Bethel township and Lower Saucon in Williams township.  Both of these locations are in Northampton County, Pennsylvania. Portland is on the Delaware River in the northern end of the county and  Williams township is to the southern end of the county.   Check out this map.   I calculated that the distance on the river between the two places  is roughly 40 miles. 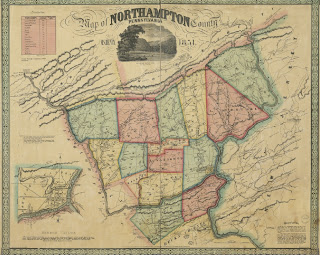 Now that would be a lot of travel on the river.  I imagine that Paul picked up skins from fur traders as he went between his tanneries.  He would have also used the river to transport the finished leather hides  to markets. There are many  dangerous rapids in the river and in December there could have been many other hazards for the men in boats to circumvent.   Evidently he had become a wealthy man for at his death in 1782 he left a large estate to his children.

I have found his name  in the PA Archives, 5th Series, Vol. 8.  He was in the 1st Battalion, and 1st class under Captain Joseph Fox.  This  abstract card is a transcription of the data extracted  from  the original records in the custody of the State Archives concerning Revolutionary War service in the Pennsylvania Militia.
His DAR  record, Ancestor #: A014691, tells us that he was a Private in the Northampton Co. Militia under the command of Colonel George Hubner  and Captain Joseph Fox.

After his untimely death his wife Maria Barbara Miller  remarried  and had five more children.  In 1785 her father filed a court petition for the  disposition of the property left to the children of Paulus Brodt.  It was not until 1789  that a final settlement of the Brodt Estate was reached.   His daughter Susanna married Christopher Illick.  Their son Sam  married Henrietta Kressler  and had a daughter name Clara who married Henry McEwen.