Valentine Anewald arrived here aboard the Snow Squirrel on  October 21, 1761 with his wife and young family.  Interestingly, The Snow Squirrel was the first ship to bring German immigrants to Philadelphia after the close of the French and Indian War since  no ships had been allowed between 1756 and 1761.   He is listed on the ship's manifest as Fallendhin Annewallt.  Valentine was married to Johanna Margaret Kurtz in Holland in 1753 and at least two of their children were born in Holland before the family came to America.  Johanna's  tombstone inscription  said she was the mother of 12 children,   but only nine are known to have reached maturity. They were:  Catharina Elizabeth Anawalt born  circa 1756  and  Anna Margaretha Anawalt  born  circa 1760.  The remaining children were born in the vicinity of Kriedersville, Northampton, Pennsylvania.   John Anawalt born  circa 1764,  Susanna Anawalt born  circa 1767, Jacob Anawalt born  06 Feb 1769,  Christina Anawalt born 19 Oct 1770, Peter Anawalt born  12 Nov 1772,  Johann "George" Anawalt born  15 Mar 1775,  and Conrad Anawalt  born  14 Feb 1778.


In researching this family through several generations I have found that there were many variations for the spelling of the name; Ohnewald,  Ahnewald, Anawalt, Anewalt, Annawald, Annewallt, Anwald. Wakefield says the name originally was “von St. Annenwaldt” meaning from, or of, St. Anne's Woods. The “von” in German indicating gentility and place or position.


Of this much is certain,  he is found in Revolutionary War records  as Felty Onawalt;  Felty being a common nickname for Valentine.  This abstract card is a transcription of data extracted from original records in the custody of the State Archives concerning Revolutionary War service in the Pennsylvania Militia.


He is buried at Kreidersville,  Pennsylvania in the Zion Stone Church Cemetery where his headstone is marked with a flag and a brass plate commemorating his service to the Revolutionary War. 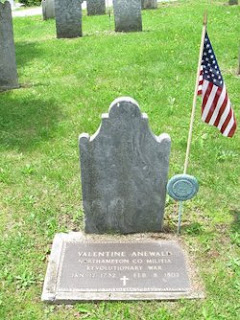 John Anawalt Wakefield, in his book,  History and Genealogy of the Anawalts and Cognate Families  tells that  Valentine  settled in Allen Township, Northampton County, Pennsylvania.  He purchased several large tracts in what was known as the "Indian  Tract" in 1773 and 1774. These transactions indicate that he had brought a considerable sum of money with him to America.  He built a large and substantial two story residence on one of those properties. He was a farmer known to raise grain and honey and was a weaver by trade.  He was also recognized as  a leader in the Lutheran Reform Church at Kreidersville.

Our line of descent from Felty Anewald  comes through his son  Johann "George" Anawalt who was born on March 15, 1775.  George had a son Stephen who married Eliza Musselman.  Their daughter Amanda married William Lauer and they were the grandparents of  Beatrice Graver Smith.  If you haven't already done so, please  read the story of Beatrice's mother Jennie Lauer.  Jennie's story is amazing.