He was also known as Stofel Illick, Stofel being a common nickname for Christopher.  Stofel Illick was a farmer and a weaver by trade.  He married  Elizabeth Huber  on March 31, 1768.    But,  I found a reference that  Christoph and Elizabeth llick took Holy Communion on Good Friday, 1767, indicating that they would have been married in 1767 before the Revolutionary War began in earnest. Together they became the parents of eleven children.  The tomb stone inscription of Elizabeth Illick says she was the mother of 11 children, eight sons and three daughters.   Johann Phillip  born March 24,1770,  Elizabeth born November 9,1771,  Johannes    born  January 22,1774, Johann Christophel  born March 12,1778,  Christina  born  January 9,1780,  Frederick,  Ann-Margaratha,   Johann Heinrich born August 26, 1781,  Johann Phillip  born  January 15,1786.  Good thing the boys followed the German custom of being called by their middle name!

With all these children to provide for it is a good thing he farmed.   As a  weaver he would have had a loom in his home to make cloth from yarn.  The yarn may have been spun on spinning wheels from wool collected from sheep.  Raising the sheep, shearing the wool, carding and processing the  wool into yarn would have been tasks  preformed by the children much like we see here. 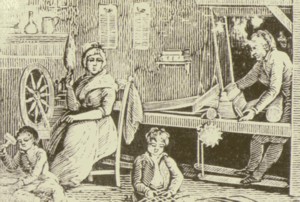 This scenario copied from a woodcut printed in The Little Book of Early American Crafts and Trades (first published in 1807) illustrates the family economy at work in the home!

The graves of Johan Christopher Illick and his wife Elizabeth Huber Illick are located in the St Lukes Old Williams Cemetery in Williams Township, Northampton County, Pennsylvania. This is not far from where the Illick family lived. 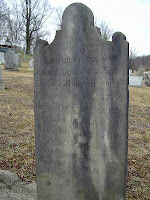 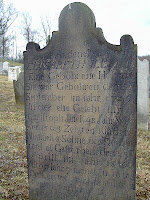 My great grandmother, Clara Illick McEwen was the great granddaughter of Christopher and Elizabeth.

Send email to chsmith47@yahoo.com
This site may be linked, but not duplicated in any way without consent. The copyright on this page must appear on all copied and/or printed material.